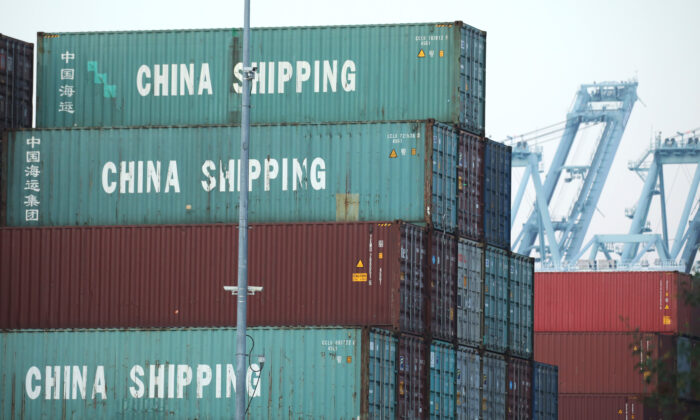 A group of bipartisan senators have written a letter to President Joe Biden asking that he maintain the tariffs on Chinese imports imposed by the Trump administration.

The senators, led by Republican Rob Portman, point out that the United States had imposed tariffs on $370 billion worth of Chinese goods in response to Beijing’s “discriminatory economic practices,” the May 25 letter states.

This includes forcing U.S. companies to enter into joint ventures with local firms in order to conduct business in China, forcing foreign companies to license technologies to Chinese firms at terms beneficial to the latter, stealing American intellectual property, intruding into U.S. computer networks, and so on.

“Rolling back the tariffs on China would undermine the U.S. position in negotiations, expose many U.S. companies and workers to a sudden flood of imports, and signal to China that waiting out the United States is preferable to changing their non-market behavior or complying with the Phase One Agreement,” the letter said.

In his recent trip to Asia, the president admitted that he was weighing cutting tariffs on Chinese goods.

Two years after signing the deal, China did not even get close to the targeted purchases. According to an analysis by Peterson Institute for International Economics (PIIE), China was obligated to buy $227.9 billion worth of American exports in 2020 and $274.5 billion in 2021 for a total of $502.4 billion.

However, China only bought $286.6 billion worth of U.S. goods and services in the two years, 57 percent of the $502.4 billion commitment.

In the letter, the senators stated that the tariffs helped Washington negotiate the phase one deal with Beijing. And yet, China continues to engage in “non-market conduct,” tilting the playing field away from American companies and workers to the benefit of the Chinese Communist Party.

In addition, Beijing continues with its human rights violations in Xinjiang and Hong Kong while becoming a strong ally of Russia as it attacks Ukraine, the letter noted.

Given such “realities,” the senators argued that it would be “counterproductive” to lift tariffs on Chinese goods in hopes that Beijing will “somehow become more cooperative” on other issues.

Rather than lift tariffs, Washington must enforce tools under the agreement to make it clear to Beijing that it is “serious” about rectifying violations of the Phase One commitment.

“If we do not exercise the legal rights under the Phase One Agreement, it will only make it more difficult to make progress with China on the subsidies, state-owned enterprises, suppression of labor rights, and other unfair behaviors that are the core of the structural obstacles to a level playing field in bilateral trade,” the letter warned.

Senators also dismissed claims that the tariffs are driving up inflation. They note that the tariffs predate the current inflation by more than three years and that Chinese imports only account for 2 percent of the goods included in the Consumer Price Index (CPI) used to measure inflation.