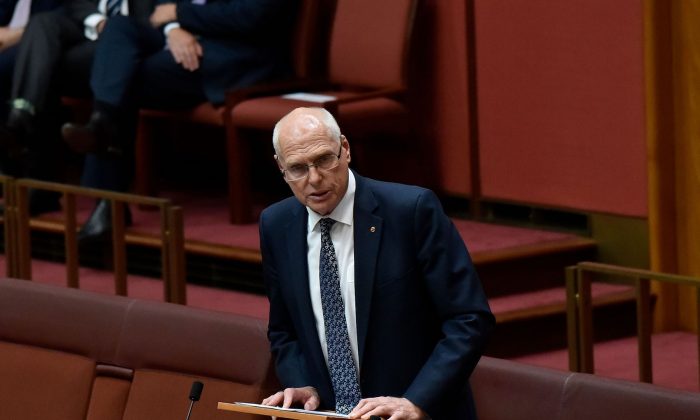 Former major general, now-Senator Jim Molan, has called on the National Press Club to refrain from giving the Chinese Embassy further opportunities to “spread its lies and disinformation.”

His comments come after the Chinese Ambassador to Australia Xiao Qian addressed the country’s Press Club on Aug. 10—at the invitation of CEO Maurice Reilly and Director Peter Phillips.

Molan said he watched the address and was unsurprised by the “thinly veiled aggression, deflection, and blame-shifting” that has become common from Chinese Communist Party (CCP) representatives.

“Disappointingly, the ambassador chose to take the platform extended to him by the National Press Club and use it to criticise Australia’s media for not glossing over China’s human rights abuses, lies and war-like aggression in our region,” the Liberal Senator said in a statement issued on Aug. 11.

Further, Xiao alluded to the need for “re-education” of Taiwanese citizens if Beijing were to take over the island so that they could gain a “correct understanding of China and the motherland.”

In response, Molan said to the credit of the Press Club members, they recognised that the ambassador’s speech was an “outright threat of violence, cloaked in euphemistic and diplomatic tones.”

“The National Press Club is an iconic institution and symbol of our free and democratic media,” he said. “These values are not consistent with the ideology of the Chinese Communist Party.”

“For this reason, I strongly urge the National Press Club to revoke all future speaking invitations to representatives of the Chinese Communist regime.”

“From our point of view, we will speak up for our national interest when that’s necessary, and we will work cooperatively where that’s possible as well,” he told reporters on Aug. 11.

Facing Up to the Taiwan Problem

Meanwhile, Lincoln Parker, chair of the Liberal Party’s Defence and National Security Policy Branch, said there were positives to be drawn from the Press Club event.

“This is not like a press conference in Beijing where all of the questions are provided prior to the address and screened,” he told The Epoch Times. “The rules for the National Press Club are completely open so the media can ask whatever they want, and we saw the Australian media do a very good job.”

“I think the Australian public has seen now that war with Taiwan is certainly a real possibility and that Beijing looks to smash Taiwan however it can.”

He also added that Australian governments needed to be more forthright on what the consequences were if an invasion of Taiwan were successful.

“What does that mean for us? What’s the ‘So what?’ to Australia and the public? Why should they care?” he said.

“First of all you’ve got a democratic country—essentially our ally—that is defeated. Second, south and north Asia, and indeed the South China Sea, would all come within Beijing’s sphere of influence—they would be the superpower and hegemon.

“Countries like the Philippines, Thailand, Malaysia, Indonesia, and indeed Japan, would recognise that the U.S. was no longer the world’s superpower and must now engage with China and bow down” he added.

Parker also said Australia would be in a “much more dangerous” position, and it would face pressure to change its policies towards Beijing.