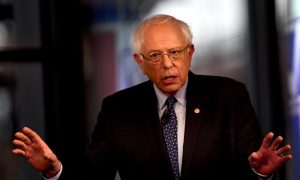 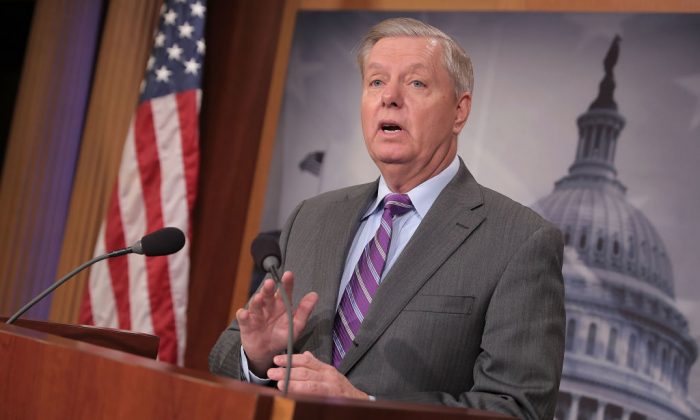 Sen. Lindsey Graham (R-S.C.) talks to reporters during a news conference at the U.S. Capitol in Washington on Nov. 1, 2017. (Chip Somodevilla/Getty Images)
Politics

Sen. Lindsey Graham (R-S.C.) condemned Senate Democrats on Sunday after five senate Democrats filed a lawsuit last week against gun-rights groups and warned the Supreme Court not to take up the case because it would damage their legitimacy. Those Senators also threatened to attempt to increase the number of judges on the Supreme Court if the court continues to interpret the second amendment in favor of gun rights groups.

Senator Graham told host Maria Bartiromo of Fox News that expanding the court has been a proposal that Democrats have declared many times before when they were not in the majority.

“Well this has been a dream of the left for decades, is to increase the number of the judges on the court, pack them with liberal judges so the court can do through the legal system what they can’t do through the ballot box,” Graham said.

Since President Trump took office, the Supreme Court tipped in favor of conservative justices and Democrats have been much more vocal about expanding or “packing,” the court.

“The dream of every leftist is to have a liberal court enacting laws from the bench. The dream for every conservative is to have judges who’ll interpret the law, not make the law,” Graham continued.

Senator Graham said he thinks President Trump will get re-elected despite who the polls favor, but regardless of who is at the helm, he is going to do everything in his power to not allow court-packing.

“Over my dead body, it’s not going to happen,” he said.

Graham is the Chairman of the Senate Judiciary Committee which is responsible for overseeing the nominations process of all federal judges for the circuit and district courts as well as justices nominated to the Supreme Court.

“So, they accuse [President] Donald Trump of changing our system — they’re the ones that are turning it upside down because they can’t win under the current construct,” he continued. “So, this idea of packing the court has been a dream of the left forever and we’re not going to let it happen.”

Packing the court is an idea many of the 2020 presidential candidates are also eager to consider. It would allow the newly elected president to shift the balance to justices of his or her choice.

Bernie Sanders has said although he would not add more justices to the bench, but he would be open to “rotating” judges. “We’ve got a terrible 5-4 majority conservative court right now. But I do believe that constitutionally we have the power to rotate judges to other courts and that brings in new blood into the Supreme Court,” Sanders said.

Other 2020 Democratic candidates, including Elizabeth Warren, Kamala Harris, Kristen Gillibrand, Amy Klobucher, Andrew Yang, Steve Bullock, and Jay Inslee have all support increasing the number of justices. They said it’s an action they would seriously consider if they get elected in 2020.

Pete Buttigieg has also weighed in. He proposed that some justices be appointed by the president and others are selected by the other justices with a unanimous vote in an attempt to “depoliticize” the judiciary.

While the Constitution outlines the process for appointing Supreme Court justices, it does not say anything about the number of seats on the Supreme Court bench. Expanding the bench to dilute its current makeup, or to benefit Democrats, would require legislation passed by both houses of Congress and a signature from the president.