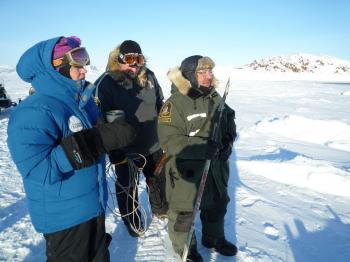 Joan Delaney
Senior Editor, Canadian Edition
Joan Delaney is Senior Editor of the Canadian edition of The Epoch Times based in Toronto. She has been with The Epoch Times in various roles since 2004.
View profile
Follow
biggersmaller
Print
In an effort to challenge the European Union’s trade ban on Canadian seal products, a Quebec senator is proposing that provinces and countries involved in the seal hunt sign on to an international declaration on ethical sealing.

Senator Céline Hervieux-Payette visited Iqaluit, Nunavut, last week to promote the Universal Declaration on the Ethical Harvest of Seals, written by a panel of experts and scientists from Canada and the United States.

The senator, who went on an Inuit seal hunt while in Nunavut, says the declaration has already been endorsed by the governments of Newfoundland and Quebec. She is also seeking an endorsement from Greenland. The IWMC World Conservation Trust, an international organization for animal conservation, officially supports it.

“I am quite confident that there will be no reason on the part of the Europeans to continue their boycott, because as far as I'm concerned the boycott itself is illegal right now,” says Hervieux-Payette.

She says the declaration could strengthen Canada’s consultations with the World Trade Organization in seeking to overturn the ban. The government has filed a complaint with the WTO arguing that a ban would violate the EU's trade obligations.

The EU Parliament voted last March to eliminate seal products such as pelts, meat, and oil, largely as a result of campaigns by animal rights groups who accuse Canadian sealers of conducting an unsustainable and inhumane seal harvest.

Although the ban hasn’t gone into effect yet, Nunavut Department of Environment Deputy Minister Simon Awa says it has already had a negative impact on the Inuit community.

Although the EU ban includes some exemptions for Inuit communities, Awa says it hasn’t made any difference. “The so-called exemption is meaningless, it doesn't mean anything.”

He notes that Nunavut doesn’t have a commercial seal harvest. “The Inuit only hunt for subsistence living. It puts food on the table. The selling of the seal skins is a by-product of our subsistence hunting.”

Hervieux-Payette says Newfoundland sealers also need the income from the annual spring harvest. She is sharply critical of anti-sealing groups for some of the tactics they use in trying to end Canada’s seal hunt.

On January 25, an activist with People for the Ethical Treatment of Animals hit Fisheries Minister Gail Shea in the face with a tofu cream pie. The incident resulted in an assault charge against an American resident.

Earlier in the month, a poster of Miss Newfoundland and Labrador Sara Green, who comes from a family of sealers, was doctored to show her covered in blood, holding a hakapik, and surrounded by bloody seal carcasses.

“This is terrorism as far as I'm concerned,” says Hervieux-Payette.

The 13-page Universal Declaration on the Ethical Harvest of Seals states that seals must be killed rapidly in a professional manner that doesn’t cause “avoidable pain.” It seeks to strike a balance between animal welfare, sustainable development, protecting ecosystems, and maintaining people’s way of life in sealing communities.

It says signatories to the document care about animal welfare, and calls for establishing a common international position on ethical standards for the seal harvest.

Hervieux-Payette wants the “vegetarian lobby” to understand that humans have a right to utilize natural resources such as animals when it is done in an ethical and sustainable manner.

“To make a living out of your own trade is, for me, a fundamental right of any individual, and this is not a sport activity—it's part of the way they make a living,” she says.

“This is probably the most watched human activity and trade in the world,” she says of the seal hunt. “I mean there are probably other activities that are much more despicable, but nobody is talking about it.”

Awa says that if the EU ban is not lifted, it will mean hardship for the Inuit.

“Every bit of economic opportunity is very, very critical to a small community . . . Everything is getting more expensive every year and so therefore it is more and more difficult for harvesters, for the hunters to make a meagre living out of hunting.”