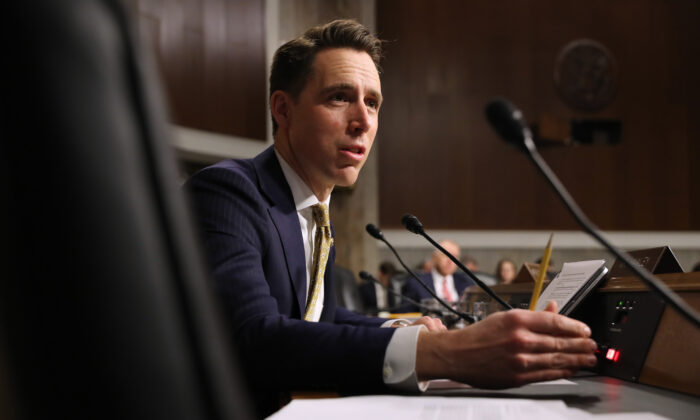 “Because that’s I think that is exactly what this report shows. It shows that our government, the most powerful law enforcement agency in the nation, the FBI, effectively meddled in an ongoing presidential campaign.”

“But when our own government does it, how can the American people have confidence and what can we do?”

Hawley also noted how the Democratic National Committee and Hillary Clinton’s campaign paid for the dossier compiled by ex-British spy Christopher Steele that was rife with uncorroborated, salacious accusations against then-candidate Donald Trump.

Horowitz’s team found that the case to surveil Page, the Trump campaign aide, rested almost entirely on the dossier. The team also found that the FBI didn’t verify any of the accusations related to Page, and found there was no evidence to back up the allegations.

“This is the most incredible, the DNC pays for the Steele dossier, solicits the Steele dossier and then gets the Federal Bureau of Investigation to go get FISA warrants, surveil an American citizen, surveil a presidential campaign, all on the basis of this manufactured garbage that they paid for, I mean that’s extraordinary, that has got to be a first time in history,” he said.

Horowitz on Wednesday told lawmakers that what the FBI did to the Trump campaign was “illegal surveillance.” He also testified that the FBI uncovered evidence that undermined Steele’s credibility—and Steele’s sources—but withheld that evidence from the FISA court.