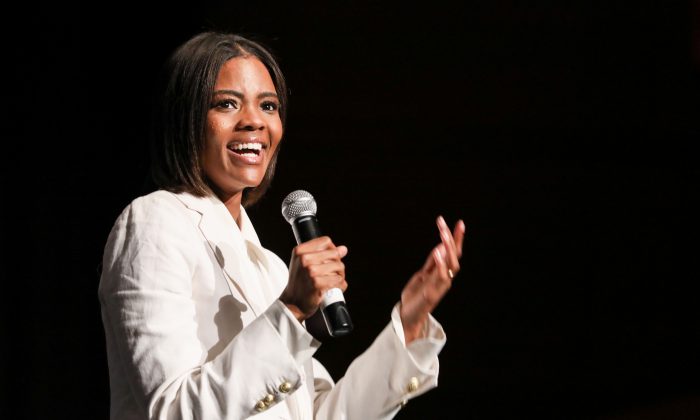 Political activist and commentator Candace Owens ran into Sen. Kamala Harris (D-Calif.) at the airport and the conversation turned to the 2020 election.

“Great morning!” Owens wrote on Twitter on July 24. “@KamalaHarris and I are flying together from DC to Detroit. Just had a lovely chat about how I will not be voting for her in 2020 because I love @realDonaldTrump.”

She added that Senator Harris was “very understanding” about her decision.

Great morning! @KamalaHarris and I are flying together from DC to Detroit.
Just had a LOVELY chat about how I will NOT be voting for her in 2020 because I love @realDonaldTrump.

She was VERY understanding because Trump is the greatest. She will lose gracefully—unlike Hillary! pic.twitter.com/Go9FHs32PC

In the post, Owens also included several photos of the two of them at the airport.

Meanwhile, the liberal Americans for Democratic Action (ADA) gave her a score of 100.

‘Coming Out’ as Conservative

Owens previously identified with the left but came out as a conservative in a July 2017 YouTube video. Since then, she’s become one of the most popular conservative speakers in America.

When asked about what changed for her, Owens told The Epoch Times about her process of becoming a conservative in a previous interview, saying “I woke up.”

“When Donald Trump came down the escalator and the whole media turned on him and called him a racist and I was a part of the cultural America and he was loved. And I just at that moment said ‘okay, there’s no way this man became racist overnight,'” she explained.

“I started to ask myself some tough questions, to look at perspectives I had never looked at in the past, and it completely transformed me,” she said.

She added that through that process, “I made a conscious decision to be a voice for black America because I thought if I could wake up, why can’t everybody else wake up?”

“We at Turning Point USA always say people aren’t opposed to conservative principles, they’re just not exposed to them,” she added.

Owens is currently the Director of Communications at Turing Point USA.

Founded by Charlie Kirk in 2012, Turning Point USA is a nonprofit youth organization promoting the principles of “fiscal responsibility, free markets, and limited government,” according to their official website.

Petr Svab contributed to this article.

Tiffany Meier
Follow
Tiffany Meier is a New York-based reporter and host of NTD's "China in Focus" and "Deep Dive."