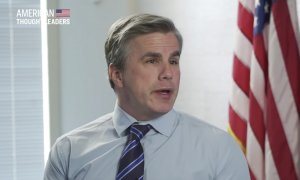 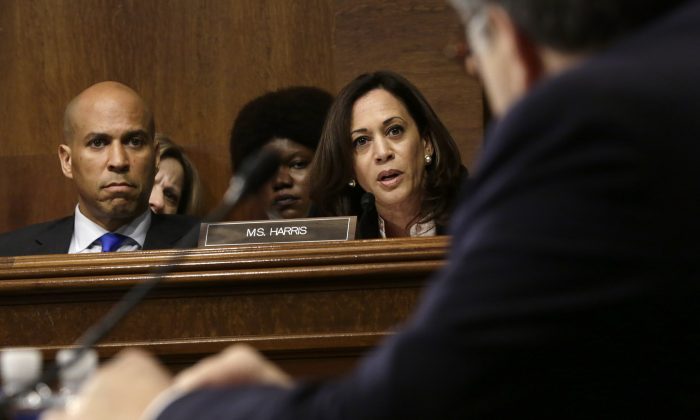 In an amazing exchange during testimony before the United States Senate on May 1, Sen. Kamala Harris (D-Calif.) badgered Attorney General William Barr by demanding to know why he hasn’t recused himself yet from having any involvement with the Mueller Special Counsel or any of the referred criminal cases that sprang from it. When that line of attack failed, Harris turned to repeatedly demanding an answer to the same recusal question about soon-to-depart Deputy Attorney General Rod Rosenstein.

In his answer to Harris’ series of questioning about why Rosenstein never recused himself from involvement in overseeing investigations in which he was a witness as well, Barr dropped a huge bombshell that just about everybody has missed.

First, Harris challenges Barr on his supposed need to recuse himself from dealing with any of the 14 cases arising from the Mueller Special Counsel investigation (at around 4 minutes 50 seconds into the MSNBC video linked above):

Harris: Will you agree to consult career DOJ ethics officials about whether your recusal from the fourteen investigations that have been discussed by my colleagues is necessary?

Barr: I don’t see any basis for it, I already consulted with them and…

Harris: Have you consulted with them about the 14 other investigations?

Barr: About the Mueller case.

Harris: Have you consulted with the career DOJ ethics officials about the appropriateness of you being involved or recusing yourself from the 14 other investigations that have been referred out?

Barr: On what basis?

Barr: What’s my conflict of interest?

Harris: I think the American public has seen quite well that you are biased in this situation and have not been objective and that would arguably be the conflict of interest.

Barr: I haven’t been the only decision maker here. Now, let’s take the Deputy Attorney General Rod Rosenstein, who was approved by the Senate 94 to 6 with specific discussion on the floor that he would be responsible for supervising the Russian investigation.  [emphasis added]

At this point Harris grins broadly as if Barr has just wandered into a trap she’s been waiting to spring shut, and says:

Harris: I’m glad you brought that up.  That’s a great topic.

Barr: He has thirty years experience and we had a number of senior prosecutors in the Department involved in this process, both career and noncareer.

Harris: Yes, I’ve read the process, sir. I have another question and I’m glad you brought that subject up, because I have a question about that.  Earlier today in response to Senator Graham, you said quote “that you consulted with Rosenstein constantly,” unquote, with respect to the Special Counsel’s investigation and report but Deputy Attorney General Rosenstein was also a key witness in the firing of FBI Director Comey.  Did you consult with –”

Harris: I’m not finished. Did you consult with DOJ Ethics officials before you enlisted Rod Rosenstein to participate in a charging decision for an investigation the subject of which he is also a witness? [emphasis added]

Harris has now swung her trap shut and stares triumphantly at Barr waiting for his answer.

Try to fully grasp what Harris’ loaded question implies: the Deputy Attorney General who oversaw the Mueller Special Counsel’s Office during its entire existence should have recused himself from any involvement whatsoever with it.

You can see from Barr’s face he can’t quite believe he’s being asked this.

Barr: My understanding was that he had been cleared already to participate in it.

This clearly was not the answer Harris expected, and her face shows it.

Harris: You had consulted with them and they cleared it?

Barr: No. I think they cleared it when he took over the investigation. That’s my understanding. [emphasis added]

Harris: You don’t know whether he has been cleared of a conflict of interest?

Barr: He wouldn’t be participating if there was a conflict of interest.

Harris: So you’re saying that it did not need to be reviewed by the career ethics officials in your office to determine if it was appropriate?

Barr: Well, I believe it was reviewed. And I also point out this seems to be a bit of a flip flop. Because when the President’s supporters were challenged…

Harris: Sir, the flip flop I think in this case is that you’re not answering the question directly. Did the ethics officials in your office and the Department of Justice review the appropriateness of Rod Rosenstein being a part of making a charging decision on an investigation which he is also a witness in?

Barr: So, as I said, my understanding was that he had been cleared and he had already been cleared before I arrived.  [emphasis added]

Harris: In making a decision on the Mueller report?

Harris: And the findings of whether or not the case would be charged on obstruction of justice? He had been cleared on that?

Barr: He was the Acting Attorney General on the Mueller investigation.

Harris: Had he been cleared … by your side, a decision…

Barr: I am informed that before I arrived, he had been cleared by the ethics officials.  [emphasis added]

Barr: [Clearly stunned that he has to state the obvious] Serving as Acting Attorney General on the Mueller case.

Harris: How about making a charging decision on obstruction of justice when the underlying offenses include him as a witness?

Barr: That’s what the Acting Attorney General’s job is.

Understand what you just read here: Harris demanded to know from Barr if Rosenstein had been cleared by the DOJ ethics department to be both a witness in Mueller-report-related cases and the overseer of those cases.

She fully anticipated Barr looking confused and either saying he had no idea if Rosenstein’s dual role and the direct conflict of interest it implied had ever been addressed by the DOJ ethics department or that he would come out and say “no.”

Barr answered–much to Senator Harris’ obvious surprise—that Rosenstein had been cleared for this dual role when he was appointed.

Of course, Harris misses the revelation here from Barr.

Yes, I believe Rosenstein is going to be a key witness in more than a few upcoming cases. Harris thinks that should disqualify Rosenstein from making decisions while he was in charge of Special Counsel Mueller.

Flustered at not getting the answer she obviously wanted, all Harris could think to do was repeat the question several times, perhaps in the hopes that Barr would change his answer. He did not. Multiple times she asked him if Rosenstein’s dual role had ever been addressed by the Department of Justice’s ethics department, and so multiple times Barr told her that yes, the issue had been addressed and Rosenstein’s dual role had been cleared by the DOJ Ethics Department at the time he was appointed to the role of Deputy Attorney General.

Here’s your key reminder: when was Rod Rosenstein appointed to head the Mueller Special Counsel? When he was confirmed to the DAG job back on April 25, 2017.  As Barr correctly notes, it was actually discussed on the Senate floor at the time his nomination to the DAG post was being debated that he would the person leading the Russia investigation if he was confirmed to this post, which he was, by a vote of 94-6.

The DOJ Ethics Department looked into the issue of Rosenstein both leading the Russia investigation and appearing as a key witness in cases that sprang from what ended up being the Mueller Special Counsel at the time he was appointed to the job way back in April 2o17.

Ponder the implications of that, because it’s clear that Senator Harris did not.