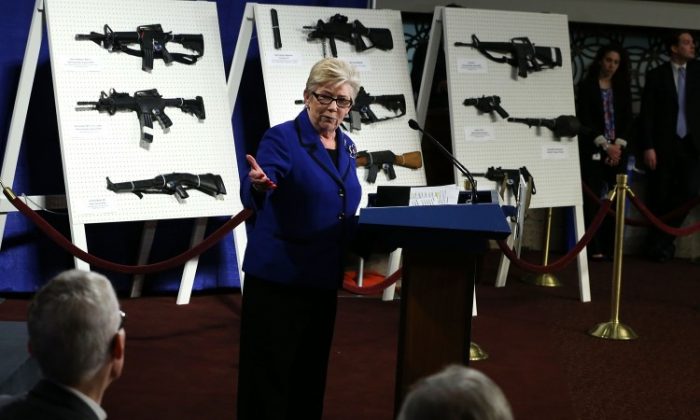 Led by Sen. Dianne Feinstein (D-Calif.), the 2013 Senate proposed a new ban on military-style assault weapons on Jan. 24. Feinstein wrote previous legislation for a 1994 assault weapons ban that expired in 2004.

“[The proposed ban] will be carefully focused on the most dangerous guns that have killed so many people over the years, while protecting the rights of gun owners by exempting hundreds of weapons that fall outside the bill’s scope,” wrote Feinstein in a press release announcing the bill. “We must take these dangerous weapons of war off our streets.”

The bill’s formal name is The Assault Weapons Ban of 2013. The bill also bans detachable magazines that accept more than 10 bullets, and it eliminates the 10-year sunset provision that ended the 1994 assault weapons ban.

“Its purpose is to dry up the supply,” of new assault weapons, not to take away anyone’s currently owned weapon, according to Feinstein. Hunting weapons would be exempt.

Feinstein said that she believes such a ban will save lives.

“These massacres don’t seem to stop. They continue on,” said Feinstein at the press conference announcing the bill, referring to the December 2012 mass murder of children at Sandy Hook Elementary School in Connecticut, in addition to scores of previous mass shootings in America.

Feinstein was at the San Francisco City Hall when former supervisor Dan White shot and killed Mayor George Moscone and supervisor Harvey Milk on Nov. 27, 1978. She was president of the San Francisco Board of Supervisors at the time, and she considered White a confidant.

Rep. Carolyn McCarthy (D-N.Y.) also spoke at the press conference. “It has to stop. It has to stop. We can do it,” she said, adding that her son survived a shooting. People who survive such incidents are changed forever, according to McCarthy.

According to a Justice Department study that Feinstein cited in her announcement, since the 2004 expiration of the previous assault weapons ban, “assault weapons have been used in at least 459 incidents, resulting in 385 deaths and 455 injuries.” The study also found that total gun deaths declined by 6.7 percent while the ban was in effect.

According to a statement from the National Rifle Association (NRA), the 1994 assault weapons ban was a failure. The NRA listed 10 arguments against restricting assault rifles and high-capacity magazines.

The NRA’s top reason is, “Semi-automatic firearms are not fully-automatic military machine guns.” Another reason is that laws banning assault weapons could lead to restrictions on handguns. The NRA argues that crime has decreased while the number of assault weapons and large-capacity magazines in society has increased. The NRA’s position is that the weapons deter crime.

Sen. Richard Blumenthal (D-Conn.) said that he has listened to law enforcement professionals in countless forums, and that they have often said to him: “Do something about the guns.” He said, “Our law enforcement community is outgunned by criminals, domestic abusers, and mentally ill people.”

Feinstein created a Twitter hashtag, #AWB2013, for the legislation. Within hours of her announcement, numerous critical remarks were posted on her Twitter feed and her Facebook page. Some comments called her a traitor and wished for her failure.

Vice President Joe Biden held a Google Hangout supporting the proposed legislation on the same day as the press conference.