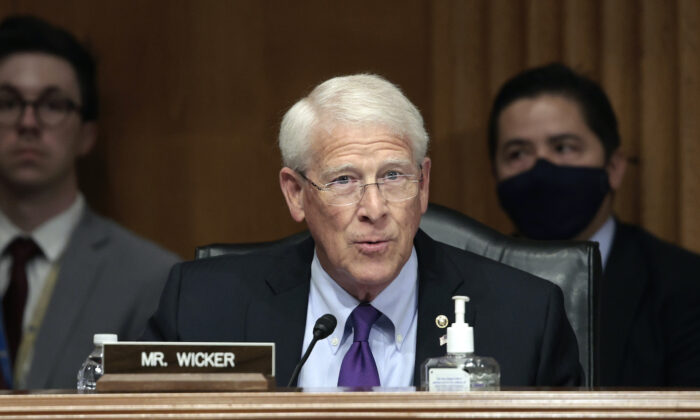 Sen. Roger Wicker (R-Miss.) speaks during a hearing with the Helsinki Commission in the Dirksen Senate Office Building in Washington, D.C., on March 23, 2022. (Anna Moneymaker/Getty Images)
Crime and Incidents

A U.S. senator on Wednesday demanded to know why two FBI special agents were not prosecuted for mishandling an investigation into convicted sex offender Larry Nassar, the former doctor of the USA Gymnastics national team.

Wicker’s letter comes after a 2021 report by the DOJ’s Office of Inspector General (OIG) found that the two FBI officials lied during their interviews to cover up or minimize their errors and gave false statements to the media.

“This decision is egregious and severely calls into question the Department’s judgment. I am particularly concerned this lack of accountability will further erode confidence in law enforcement among victims of sexual abuse, making it less likely abuse will be reported in the future,” Wicker wrote.

“The right of Olympic athletes to compete and train in an environment free from abuse of any kind is of the utmost importance. In this instance, young women, mostly minors, were sexually abused by an individual entrusted with their care and well-being.”

The ranking member of the Senate Commerce Committee requested that the DOJ brief the committee on the review process that confirmed the DOJ’s decisions not to bring charges.

He also requested that the DOJ provide confirmation on the number of people allegedly abused by Nasser, the number allegedly abused after the FBI was notified about Nasser, and for an explanation on whether further abuses might have been reduced had the FBI had acted sooner.

The Epoch Times has reached out to the FBI for comment.

After allegations of Nassar’s abuse were first reported to the FBI Indianapolis Field Office by the president of USA Gymnastics in 2015, local field agents failed to respond “with the utmost seriousness and urgency that the allegations deserved and required,” the DOJ OIG report found.

The FBI has admitted that its agents mishandled the investigation but the OIG, while noting the seriousness of the former agents lying during the investigation, said there wasn’t enough to bring a federal criminal case.

On Wednesday, more than 90 athletes, including Simone Biles and others who say they were abused by Nassar, announced they are suing the FBI for $1 billion for its mishandling of their cases.

“It is time for the FBI to be held accountable,” said Oklahoma’s Maggie Nichols, national champion gymnast from 2017 to 2019.

Former University of Michigan gymnast Samantha Roy, one of the claimants, said that if the FBI had done its job, Nassar “would have been stopped before he ever had the chance to abuse hundreds of girls, including me.”

Nassar pleaded guilty in 2017 and was sentenced to up to 175 years in prison on numerous charges, including possessing child sex abuse material and sexual abuse.