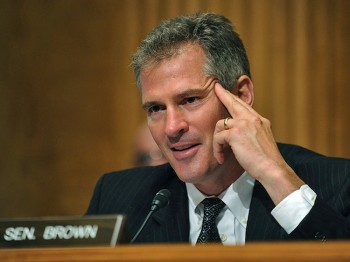 US Senator Scott Brown (R-Mass), last July 2010 on Capitol Hill in Washington. Recently, Brown has publicly rejected the Republican budge plan because of its stance on Medicare reform. ( Tim Sloan/Getty Images )
US

Steve Gigliotti
View profile
Follow
biggersmaller
Print
BOSTON—The Republican budget that has recently been presented by the house has been under debate. One hot button of the debate is Medicare reform. Senator Scott Brown of Massachusetts has publicly rejected the plan because of its stance on Medicare reform.

Senator Brown in an op-ed in Politico said, “While I applaud Ryan for getting the conversation started, I cannot support his specific plan — and therefore will vote “no” on his budget.”

He followed, “We should start by making improvements to the traditional Medicare plan.”

He said, “Our country is on an unsustainable fiscal path. But I do not think it requires us to change Medicare as we know it. We can work inside of Medicare to make it more solvent.”

According to Ryan, failure to revamp the federal budget system is not an option. In a press release Ryan said, “Failing to act – as the President’s budget does – would mean the end of these programs as we know them. Without action, the Social Security Trustees report that beneficiaries will either see a 22 percent benefit cut or a corresponding hike in payroll taxes. Similarly, the Trustees for Medicare say that “Without corrective legislation, therefore, the assets of the trust fund would be exhausted within the next seven to 19 years.”

Senator Brown, a Republican in a state with a huge Democratic majority, has voiced what many see as a conflict within the Republican party over decreasing entitlements in order to balance the budget.