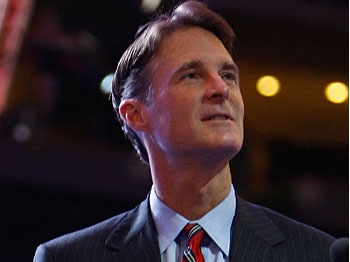 U.S. Sen. Evan Bayh will not be running for reelection in 2010. (Chip Somodevilla/Getty Images)
US

Jim Fogarty
View profile
Follow
biggersmaller
Print
Senator Evan Bayh's announcement Monday that he would not seek reelection in November came as a surprise to both Democrats and Republicans, and has inspired interpretation by those in the media.

The lead of a Feb. 16 Associated Press article on the subject described Indiana Sen. Bayh as a “centrist Democrat,” and right-off-the-bat framed his refusal to seek re-election as “giving Republicans a chance to pick up a Senate seat.”

Various media sources approach the subject as a possible gain for Republicans and loss of Democratic majority power; some even use this loss in the context of hampering President Obama's reform agenda, or a trend of losing “centrist” moderates in Congress.

The senator himself did not distinguish Republicans in his reasons for giving up the seat, but criticized Washington itself—specifically partisan politics in Congress—in a news conference held at Indiana University-Purdue University Indianapolis (IUPUI).

Bayh, a former Indiana secretary of state and governor, stated that, “Congress is not operating as it should,” and is often conducted with “too much partisanship and not enough progress—too much narrow ideology and not enough practical problem-solving.”

Mr. Bayh may have been influenced personally by media reports that Republicans, preparing for upcoming congressional election battles, were preparing to attack his wife.

In the past, Sen. Bayh's wife Susan worked for a global pharmaceutical company and insurance company, and presently is an attorney on the Board of Directors for Wellpoint, a leading health plan provider serving 35 million clients. Republican strategists were expected to push the conflict-of-interest potential of this relationship during the upcoming campaign season.

But a quote from Sen. Bayh's announcement hints at something bigger: “Even at a time of enormous challenge, the peoples’ business is not being done,” Sen. Bayh said.

Sen. Bayh's use of “the people” can be seen as a nod to the rising populist theme manifested in groups like the Tea Party movement, credited as an influence in Massachusetts Sen. Scott Brown's election upset last month, and its feared impact on November elections. These groups profess no allegiance to establishment politics and parties, but say they seek a cleanup of Washington and a return to constitutional principles in governance.

Former Republican Sen. Dan Coats was wooed out of retirement to challenge Sen. Bayh in November for the Indiana Senate seat. Mr. Coats served as an Indiana senator from 1989 to 1998, his year of retirement. Reports state that Coats has received encouragement and support from national GOP leadership.

But his candidacy has not been received quite so warmly by some Indiana Tea Party members. It is seen as a push by the national Republican establishment, which they consider out of touch with regional conservatives and Tea Party members.

Politico.com reported that shortly after Mr. Coats announced his candidacy, e-mails circulated from Indiana Tea Party groups and organizers criticizing the choice of Coats as “the Republican Party’s way of slapping we the people in the face.”

As local Tea Party groups attempt to strengthen their voice, including organizing an Indiana Patriot coalition, the message is for national partisan representatives to back off. “We have our own state, we have our own candidates, and we have some darned good candidates,” said Indiana organizer Mark Leyva, according to Politico.

This includes Ballot Access signature drives from state lawmakers, like Republicans Marlin Stutzman and Don Bates Jr., both less established figures seeking to challenge an establishment candidate in the primary.