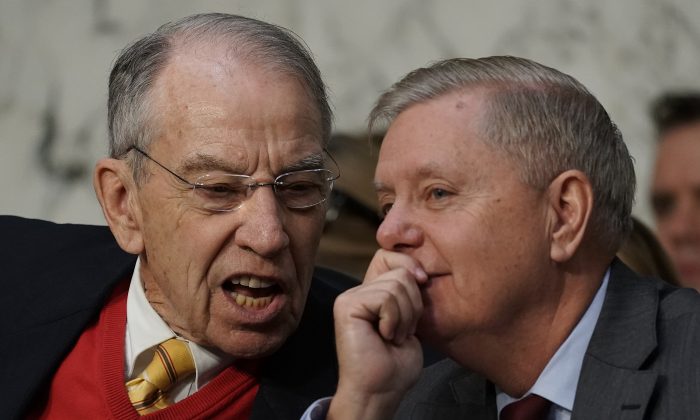 Senate’s ‘Blue Slips’ May Be Casualty of Democrats’ Religious Tests

For more than 100 years, senators have used the slips—literally a blue sheet of paper—to indicate support or opposition on a presidential nominee. A home-state senator’s disapproval on a blue slip was customarily the kiss of death for a nomination.

Graham’s predecessor as committee chairman, Sen. Charles Grassley (R-Iowa), set what could be a relevant precedent for the South Carolinian.

Frustrated with Democrats’ delaying tactics against President Donald Trump’s nominees for federal appeals court vacancies, Grassley announced Nov. 16, 2017, that he would no longer “allow senators to prevent a committee hearing for political or ideological reasons. Using the blue slip for these purposes is not consistent with historical practice.”

But Baldwin’s reversal on Giampietro’s nomination followed publication of a Buzzfeed story quoting him making clear his belief in strongly traditional Catholic teachings on marriage as only a union between a man and a woman and other social issues.

Baldwin became the first openly gay person elected to the Senate in 2012. Her reversal and the White House withdrawal of Giampietro puts Graham in a tough situation by forcing him to choose among several difficult options.

On the one hand, in future nominations, Graham could simply extend Grassley’s action to district court nominees on some basis, even though doing so could effectively end the role of blue slips on judicial nominations.

If Graham takes this position, it’s possible Trump could resubmit the Giampietro nomination.

Or Graham could ignore Baldwin’s action, thus appearing to consent to Democrats using the tradition to advance the use of religious litmus tests, in violation of Article 6, Clause 3 of the Constitution.

A committee spokesman for Graham couldn’t be reached for comment Feb. 25. But key conservative political activists made clear which courses of action they prefer.

Brian Darling of the Liberty Government Affairs public relations firm and a former judiciary panel aide told The Epoch Times that “using a religious test on any nomination is unconstitutional and runs contrary to everything that we stand for as a nation.”

Darling said he doesn’t think Graham “should respect blue slips with respect to these types of activities,” and “a slip is merely a courtesy and a tradition of the Senate, it’s not in the rules.”

For that reason and “because they are chipping away at the filibuster anyway, Darling said, “it makes sense for Senator Graham to say ‘if you’re going to use a religious test to blue-slip a nominee, I’m not going to respect it. I’ll respect the blue slip for any other reason but not for reasons that run contrary to our constitutional system.’”

Similarly, Heritage Action Executive Director Tim Chapman told The Epoch Times that “it is Senator Graham’s prerogative as chairman to honor the blue slip tradition but Americans of faith across the country—and those who are not—should be deeply concerned about the end result of Baldwin’s action.

“For all practical purposes, Senator Baldwin didn’t even allow a hearing for a nominee because he has religious beliefs that are completely mainstream and well within the tradition of Western Christianity as expressed for millennia. This is becoming an alarming pattern,” Chapman said.

“To satisfy their increasingly secular and stridently progressive base, the leadership of the Democratic Party has shut the door on the views of millions and millions of Americans,” he said.

“Nominees who are asked such questions should consider the following as a model answer: ‘Senator, I am unable to answer that question because its premise violates Article VI, clause 3, of the Constitution,’” Shackleford wrote in a Feb. 20 opinion piece in the Washington Examiner.

“Responding in this manner not only serves to frustrate Democratic senators’ attempts to elicit a particular nominee’s position on certain issues, but it has the added benefit of demonstrating Article VI’s value as a shield for future nominees,” Shackleford said.