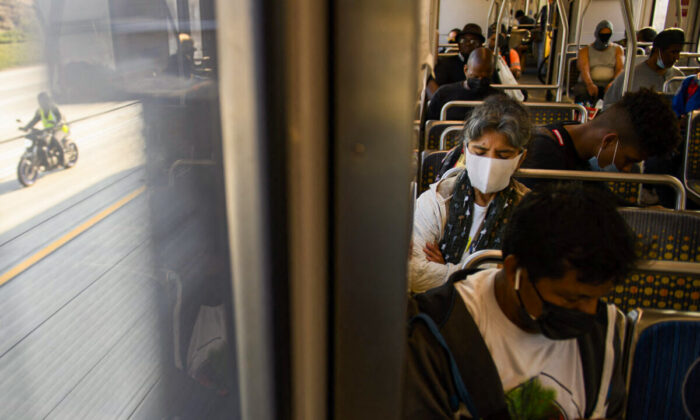 The U.S. Senate voted to pass a resolution to repeal a mask mandate on airplanes and other public transport on Tuesday, drawing a quick veto threat from the White House.

The vote to overturn the public health order was 57–40. The order has been in place since soon after President Joe Biden took office in January 2021. Former President Donald Trump had rejected the mandate.

The resolution to repeal the order was introduced by Sen. Rand Paul (R-Ky.). He said the vote late Tuesday “sent a message to unelected government bureaucrats to stop the anti-science, nanny state requirement of travel mask mandates.”

The White House issued a statement of administrative policy (pdf) saying Biden would veto the measure if Congress passes the resolution. The statement said that mask mandate “has been a critical public health tool” to prevent the spread of COVID-19.

“Public transportation and transportation hubs are places where people across communities congregate, often for extended periods and in close quarters. The determination of the timeline and circumstances under which masks should be required in these settings should be guided by science, not politics,” read the statement.

The repeal vote was short of the two-thirds majority that would be needed to override a Biden veto.

The mandate was set to expire on Friday. The Centers for Disease Control and Prevention (CDC) recently recommended that the Transportation Security Administration (TSA) extend the public transport mask mandate through April 18.

The White House said last week it would follow through with the extension but pledged a new review.

The mandate has drawn significant opposition from Republicans who note that the CDC said last week that 98 percent of Americans live in places where it is safe to ditch indoor masks. Airlines and travel groups have also called for a repeal.

Last month, the CDC said it would no longer require masks on buses or vans operated by public or private school systems. Travelers are allowed to remove masks briefly to eat or drink.