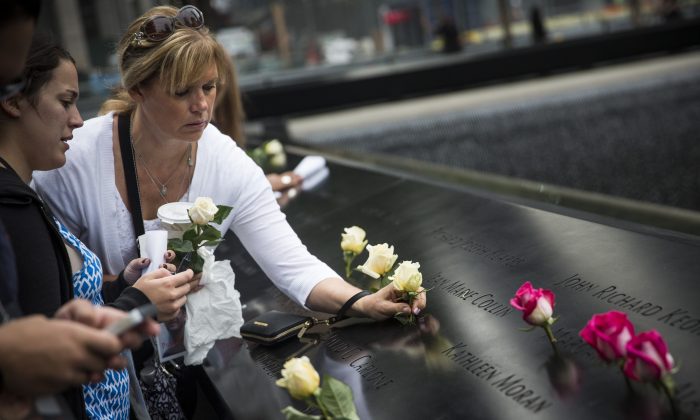 A woman places flowers on the name of a loved one during the memorial observances held at the site of the World Trade Center on September 11, 2014, in New York City. (Andrew Burton/Getty Images)
US

The U.S. Senate passed the Justice Against Sponsors of Terrorism Act (JASTA) on May 17, which would allow families of 9/11 victims to sue the government of Saudi Arabia.

The legislation, sponsored by Sen. Chuck Schumer (D-N.Y.) and Sen. John Cornyn, (R-Texas), has put Congress against the Obama Administration.

JASTA was approved by a voice vote, and had prompted an earlier threat from Saudi Arabia—a Middle Eastern ally—which vowed to pull billions of dollars from the U.S. economy if the legislation is passed.

It is up to the House now to act on the legislation.

The bill would allow victims of the 2001 terrorist attacks to sue in U.S. courts for any role the Saudi government may have played.

“It will allow the victims of 9/11 to pursue some small measure of justice by giving them a legal avenue to hold foreign sponsors of terrorism accountable for their actions,” said Schumer in his floor speech.

“The fact that some foreign governments may have aided and abetted terrorism is infuriating to the families if justice is not done,” he added.

Sen. Cornyn said the legislation emphasizes that the United States “will combat terrorism with every tool we have available, and that the victims of terrorist attacks in our country should have every means at their disposal to seek justice.”

Democrat senators have strongly supported the bill, positioning them against the Obama administration.

However, Schumer was confident the Senate had the necessary two-thirds vote of the chamber to overrule a veto from the president.

Sen. Lindsey Graham (R-S.C.), chairman of the Senate subcommittee, had previously blocked the legislation from moving to the Senate floor until changes were made to make sure the bill didn’t backfire on the United States.

Sen. Graham claimed that the bill could make it possible for a foreign country to sue the United States if a gateway was opened when U.S. citizens sued Saudis. The path of the bill was cleared this month.