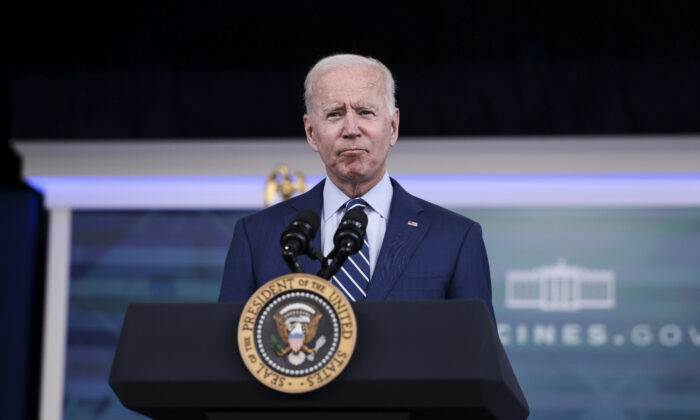 U.S. President Joe Biden delivers remarks ahead of receiving a third dose of the Pfizer/BioNTech Covid-19 vaccine in the South Court Auditorium in the White House on Sept. 27, 2021. (Anna Moneymaker/Getty Images)
Congress

The Senate on Sept. 30 defeated a Republican amendment that attempted to block President Joe Biden’s announced mandate for private businesses with 100 or more workers.

Sen. Roger Marshall (R-Kan.) introduced the amendment (pdf) to a government funding measure, blocking the usage of federal money for COVID-19 vaccine mandates. Republicans and Democrats split 50–50 on the vote, falling short of the 60 votes required to pass the amendment.

“My wife and I got the vaccine. My parents got the vaccine, and they’re waiting to get their booster. But whether to receive it is a personal choice between individuals and their doctor, not mandated via unconstitutional executive actions that the administration recently acknowledged they didn’t have authority to put in place,” Marshall said in support of his amendment.

Marshall also argued that the Biden administration’s mandates—details of which have yet to be disclosed—are tantamount to federal overreach and would significantly weaken the economy by fining private businesses. The vaccine mandate, he said, is merely an attempt by the federal government to acquire more power and isn’t about dealing with the pandemic.

“No precedent exists in American history for punishing private employers who don’t enforce government vaccination edicts,” he said. “Astonishingly, House Democrats included fines up to $700,000 on businesses that have unvaccinated employees as a way to pay for their out-of-control spending.”

In a statement to The Epoch Times on Sept. 29, the Occupational Safety and Health Administration (OSHA) confirmed that the agency is working on the rule, which would require businesses to “ensure their workforce is fully vaccinated or require any workers who remain unvaccinated to produce a negative test result on at least a weekly basis before coming to work.”

Sen. Patrick Leahy (D-Vt.), a senior member of the Democrat caucus, on Sept. 30 said he wouldn’t support the amendment, noting the 700,000 Americans who have reportedly died from COVID-19.

“Drive down the mall and look at the flags by the Washington Monument,” Leahy said in reference to a display of flags marking their deaths. The amendment “weakens one of our strongest tools to get people safely through this crisis.”

Senate Minority Leader Mitch McConnell (R-Ky.), who has frequently encouraged people to get vaccinated and received his booster shot earlier this week, voted in favor of Marshall’s amendment.

Several Republican-led states have promised to sue the Biden administration as soon as OSHA releases the rule. Biden announced the mandate, which would apply to tens of millions of workers at private businesses, on Sept. 9, as well as other mandates requiring vaccinations for all federal workers, federal contractors, and health care workers who are employed at facilities that receive Medicare or Medicaid funding.