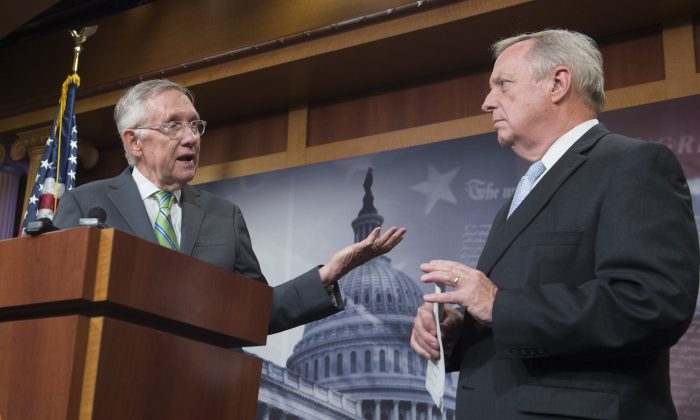 US Senator Dick Durbin, Democrat of Illinois and Senate Democratic Whip, speaks with Senate Democratic Leader Harry Reid (L), following a failed cloture vote to end debate on the Iran nuclear deal and block a final vote on the disapproval of the deal, in the US Senate at the US Capitol in Washington, DC, September 10, 2015. (Saul Loeb/AFP/Getty Images)
Politics

WASHINGTON—Senate Republicans on Tuesday pushed for a final say on the Iran nuclear deal before the congressional review period expires, but Democrats were poised to stop any attempt to undercut the international accord and President Barack Obama’s win on a top foreign policy initiative.

The Senate was slated to vote for a second time in a week on moving ahead on a resolution rejecting the deal, and the outcome was expected to be the same, with Democrats mustering enough votes to block the measure.

“A strong, bipartisan majority of the House of Representatives voted to reject the deal. A strong, bipartisan majority of the Senate would vote to reject the deal too.” McConnell said. “If only Democrat senators would stop blocking the American people from even having a final vote on one of the most consequential foreign policy issues of our age.”

The international accord backed by the United States, Iran and five world powers would curb Iran’s nuclear program in exchange for relief from crippling sanctions that have undercut Tehran’s economy.

The accord got a boost as the Vatican, just ahead of Pope Francis’ visit to Washington next week, welcomed the agreement.

Archbishop Paul Gallagher, the Holy See’s secretary for relations with states, said in Vienna on Monday that the Vatican backs the agreement because it thinks the best way to resolve disputes is through dialogue and negotiation.

Gallagher said the Vatican hopes that full implementation of the accord “will ensure the peaceful nature of Iran’s nuclear program” and “will be a definitive step toward greater stability and security in the region.”

It’s unclear if this is the last vote the Republican-led Senate will take on the Iran nuclear deal this week.

Though the measure is unlikely to advance, Republicans are staging the Senate vote to make political points against Democrats and in future Senate races. They point to polls showing Americans have reservations about the deal.

Republicans also are working to craft new sanctions legislation to maintain a hardline stance against Iran. Looking to next year’s elections, Republican campaign committees also have targeted Democrats who backed the deal and some organizations against the deal already have threatened to withdraw political contributions from members of Congress who backed it.

The National Republican Congressional Committee issued several statements on Monday criticizing individual Democrats who were in favor of the deal, including those in Connecticut, Florida and New York. Katie Martin, communications director for the committee, described the agreement as a “dangerous deal with Iran” that will put U.S. national security and the safety of U.S. troops and allies at risk.