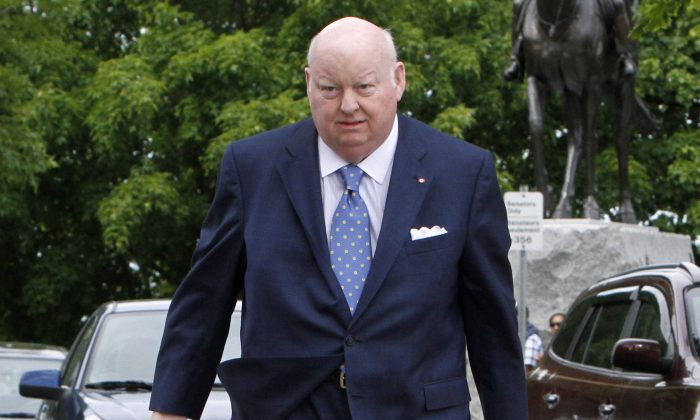 Sen. Mike Duffy makes his way to the Senate on Parliament Hill in Ottawa, Canada, on May 28, 2013. (The Canadian Press/Fred Chartrand)
Canada

OTTAWA—Prime Minister Stephen Harper was in the hot seat for the second consecutive day Wednesday, facing an opposition inquisition about his office’s involvement in the scandal swirling around Sen. Mike Duffy’s inappropriate expense claims.

However, the prime minister continued to evade answering some of the most crucial questions, including why the Conservative government initially went to such lengths to protect Duffy given an emerging portrait of repeated expense irregularities.

Harper’s chief of staff, Nigel Wright, cut a personal cheque for $90,000 to enable the disgraced senator to pay back his invalid claims. Wright resigned five days after his involvement in the affair came to light.

Harper continued to insist Wednesday that he knew nothing about Wright’s decision to bail out Duffy until his chief of staff informed him about the cheque on May 15, at which point his office immediately issued a public statement on the matter.

And he tried to turn the tables on skeptical opposition leaders, claiming he acted more quickly and decisively on the Duffy matter than they’ve done when faced with ethical lapses of their own.

“As soon as this information was conveyed to me by the former chief of staff, I immediately insisted he go to the appropriate authorities and the information be made public,” Harper told the Commons.

“Which is totally different than the leader of the NDP, who withheld information from the public and from the police for 17 years.”

He was referring to the fact that NDP Leader Tom Mulcair waited until 2011 to speak to police about a 1994 meeting with former Laval mayor Gilles Vaillancourt, at which Mulcair suspected he was about to be offered a bribe. Mulcair has said he had nothing to report because he had not actually seen any cash.

Harper also rounded on Liberal Leader Justin Trudeau, accusing him of taking “no action whatsoever” to address reports that Liberal Sen. Pana Merchant is the beneficiary of her husband’s secret offshore bank account worth $1.7 million.

Trudeau said Wednesday that as soon as he learned of the situation he instructed the Liberal leader in the Senate to ask Merchant to meet with the Senate’s ethics officer about the matter, and that she has complied.

Harper has responded to 42 direct questions on the Senate expense scandal over two days in the House this week, but riddles abound.

—Did anyone other than Wright in the Prime Minister’s Office deal with the ongoing Duffy expense file during the months it was a high-profile, and politically sensitive, public issue?

—Was the prime minister part of those discussions and what direction did he give his chief of staff, or anyone else, to handle the matter?

—Why was it so important to keep Duffy’s reputation clean that Harper’s chief of staff would personally intervene with a $90,000 “gift”?

—Was a contractual arrangement made between Duffy and Wright over the payment? If so, what are the terms of the contract?

—Why did Duffy tell people he had a deal with the PMO to “go easy” on him and that he’d been told by the PMO not to speak about the matter?

—Who in the PMO discussed the Duffy matter with senators David Tkachuk and Caroline Stewart Olsen, the Conservative members on the special three-member Senate sub-committee responsible for “sanitizing” Duffy’s expense report? Tkachuk has publicly confirmed such discussions took place.

—The PMO repeatedly defended the actions of Wright after acknowledging the cheque to Duffy. “The prime minister has full confidence in Mr. Wright and Mr. Wright is staying on,” spokesman Andrew MacDougall said May 17. On May 19 Harper accepted Wright’s resignation. What changed the prime minister’s mind in the interim?

“I don’t think we’re that farther ahead in terms of information than we were a couple of days ago,” said Liberal MP Bob Rae. “The prime minister has claimed that he didn’t know nothing.”

Calling Harper’s the “most controlling administration in the history of the country,” Rae said the expense scandal damage control had to have been handled by the PMO.

“To suggest that what was going on in the Senate was an act of somehow sort of spontaneous combustion is, frankly, preposterous.”

“I was rather surprised that what he was trying to do is say, ‘Listen, we have to blame the New Democrat Party leader for not having accepted any kind of illegal money or being part of any kind of secret deal 17 years ago’—while the discussion today is whether a potentially illegal payment was made out of the Prime Minister’s Office,” Angus said.