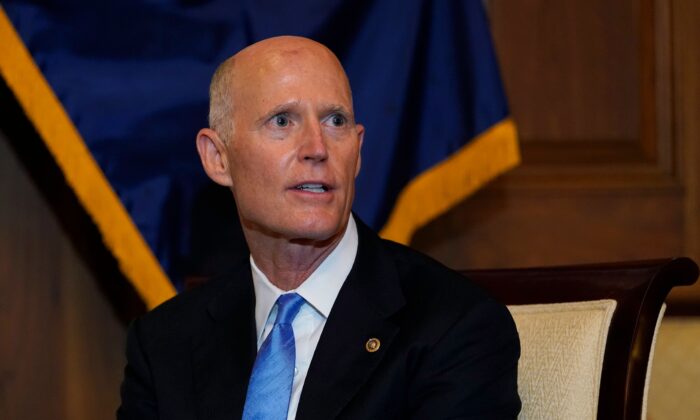 Sen. Rick Scott (R-Fla.) answers a reporter's question as he meets with Judge Amy Coney Barrett (out of frame), nominee for the Supreme Court, on Capitol Hill in Washington on Sept. 29, 2020. (Susan Walsh/Pool/AFP via Getty Images)
Republicans

A coalition of Senate Republicans led by Sen. Rick Scott (R-Fla.) have introduced legislation that would end the Biden administration’s requirement that foreign truckers transporting goods be vaccinated to enter the United States.

In January, both the U.S. and Canadian federal governments instituted rules requiring that foreign truckers transporting goods over international lines be vaccinated.

Even though the Supreme Court struck down President Joe Biden’s controversial private-sector vaccine mandate as unconstitutional in mid-January, the trucker mandate has remained in effect.

In a press release, proponents of the bill explained, “The TRUCKERS Act would exempt non-U.S. citizen commercial truck drivers traveling from Canada or Mexico who are seeking to temporarily enter the United States for business through a land port of entry from proof of vaccination requirements.”

“The mistreatment of truck drivers needs to end now,” Scott wrote. “They are essential to U.S. supply chains & deserve our full support. I’m announcing a bill next week to end the pointless vax mandates on international truck drivers that are hurting these workers & our economy. #TRUCKERSAct”

In several statements, the bill’s supporters explained their reasons for backing the proposal; Each noted that the supply chain is already struggling, making the mandate an ill-advised policy.

Hawley, who has been an outspoken critic of vaccines mandates, said of the bill, “We’re in the middle of a supply chain crisis and skyrocketing inflation, and Joe Biden’s priority is to shut down truckers bringing much needed goods and groceries unless they get a vaccine shot.

“The people [who] that decision will hurt most are American families,” Hawley argued. “This mandate and others like them must be junked. Quit hurting working people.”

Lee, who has long argued that the government’s intervention in the economy and commerce should be limited, made a similar argument.

“The truck driver shortage and supply chain crisis continue to wreak havoc on the U.S. economy. Inflation is rampant and Americans are paying the price,” Lee said. “All that can be done, should be done to alleviate the harm.

“The TRUCKERS Act is designed to do just that. Striking down this mandate is an opportunity for members of Congress to show they stand on the side of prosperity, freedom, and the American family.”

Marshall called the mandates “unconstitutional,” and said that he’s “proud to partner with Senator Scott to introduce legislation that will protect hardworking truck drivers from this blatant government overreach.”

Cramer called the mandates “an extreme abuse of power with far-reaching consequences,” and also emphasized the effect the mandates will have on an already-struggling supply chain.

“Our bill provides much-needed relief from burdensome vaccine mandates to allow commerce to flow freely throughout North America,” he added.

Rep. Carlos Gimenez (R-Fla.) will introduce the same bill in the House this week.

“It is time for us to end this ridiculous vaccine mandate on truckers and begin taking steps to return America back to normal,” Gimenez said. “Senator Rick Scott and I have been on the forefront of restoring our supply chains by reversing these disastrous decisions by the Biden administration. I am honored to work with him again on this issue.”

The legislation has already won the support of the Owner-Operator Independent Drivers Association.

Its president Todd Spencer said, “We thank Senator Scott for leading this important effort to reverse an arbitrary mandate that has slowed the movement of freight across our borders and made the already difficult job of trucking even more challenging. Truckers are essential workers and federal policies should reflect the critical role they play in our daily lives. We applaud Senator Scott and his colleagues for introducing legislation to end this unnecessary and intrusive requirement.”

Nevertheless, it will be difficult for Republicans to pass the legislation.

Democrats control both the House and Senate by a slim majority. Even though some Democrats have indicated that they would be willing to lift CCP virus measures over the next few months, most congressional Democrats continue to walk in lockstep with the Biden administration on COVID policy.

For the TRUCKERS Act to pass, House Republicans will need to win the support of at least a few Democrats.

But to get even this far, Republicans will have to convince Speaker of the House Nancy Pelosi (D-Calif.)—who as speaker decides which bills receive a floor vote—to allow them to bring the legislation to the floor.

If they manage this, the bill will face a tougher hurdle in the Senate.

Like almost all Senate legislation, the TRUCKERS Act will need to overcome the 60-vote filibuster threshold before it can come to the floor for a simple majority vote. To overcome this threshold, Republicans will need to be entirely united behind the bill and to win the support of at least 10 Democrats.

In the past, Sens. Joe Manchin (D-W. Va.) and Jon Tester (D-Mont.) have joined with Republicans to oppose Biden’s private sector vaccine mandate, but these are the only two Democrats in the Senate who have indicated any skepticism toward mandates.

Even if Manchin and Tester decide to support the TRUCKERS Act, it will be far short of the 60-vote threshold needed to advance.

In addition, the bill likely will not even make it to the floor—under Senate rules, Senate Majority Leader Chuck Schumer (D-N.Y.) has almost unilateral control over what does and does not get a floor vote.

If the bill does manage to pass the Senate, it would head to Biden’s desk. But because he put the trucker rule in place himself, he is unlikely to sign off on a bill that would undo his mandate.

Because of this, the bill has little chance of becoming law while Democrats retain control of the White House and Congress.

However, the mandates have faced grassroots opposition from truckers.

The U.S. and Canada-imposed mandates were the cause that united truckers in the “Freedom Convoy,” a coalition of hundreds of truckers who traveled to and occupied Ottawa, demanding an end to the mandates. On Monday, Canada’s parliament voted to criminalize the protest, and truckers in Ottawa have faced arrest and have been forcefully dispersed.

Despite this, many Canadian truckers have persisted in their opposition to the policy.

A similar demonstration has been planned for Washington in the coming weeks.