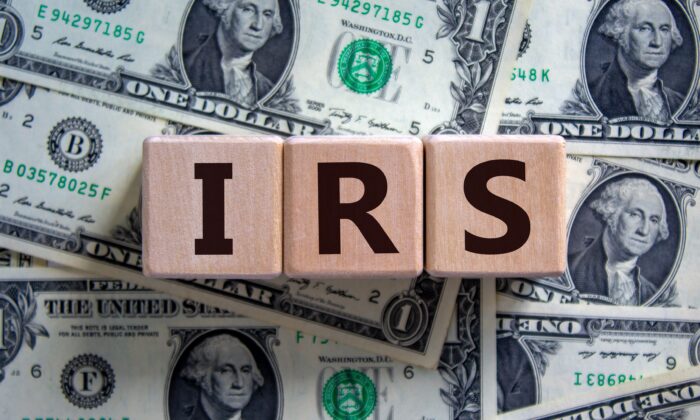 A group of Republican U.S. senators introduced a new bill on Sept. 11 designed to curtail the growing power of the Internal Revenue Service (IRS).

The bill, which is sponsored by Senators James Lankford (R-Okla.) and Mike Crapo (R-ID), responds to the Inflation Reduction Act signed into law in August, which allots $80 billion of additional funding to the IRS. The new surplus in funding has raised alarms that the IRS will use its power to harass middle-class Americans, and it is this fear that the new bill attempts to address.

The purpose of the bill is simple: The proposed legislation stipulates that none of the additional funding provided to the IRS in the Inflation Reduction Act should be used to audit Americans making less than $400,000 annually.

“With their so-called ‘Inflation Reduction Act,’ the Democrats just gave the IRS $80 billion to hire thousands of new IRS enforcement agents to squeeze more money from taxpayers’ pocketbooks,” Senator Lankford said in a statement. “Democrats needed billions to pay for their progressive Green New Deal climate-change policies in their bill, and their gimmicks and games are going to worsen our economic tailspin and higher costs for taxpayers in all income levels.”

The bill’s co-sponsor is in consensus with Lankford, arguing that the targeting of the middle class will be a necessary feature of the new IRS agenda, as the agency probes deeper into the finances of middle-class Americans.

“Democrats cannot achieve their desired tax revenue goals without targeting the middle class, small businesses, and taxpayers earning under $400,000 per year—taxpayers who cannot afford teams of lawyers and legal fees—which is why they rejected my original amendment,” Crapo said in a statement. “While advocates promise they do not intend to increase audits on people making less than $400,000, the best way to protect those taxpayers is to turn that promise into law.”

While the Biden administration has emphasized the additional funding as a means to target the wealthy, there are a number of incentives which dissuade the IRS from targeting those of the highest income bracket. The finances of the very wealthy are often far more complex than salaried workers, meaning that more resources must be devoted to audits of billionaires than middle-class families.

While the bill is unlikely to pass through the Democrat-controlled Senate, it has received critical support from one of the most powerful members of the Republican Party—none other than Senate Minority Leader Mitch McConnell (R-Ky.), who wrote in a tweet, on Sept. 12, that he supported the new legislation.