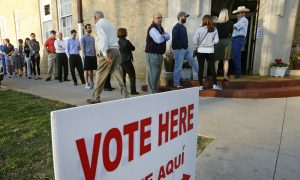 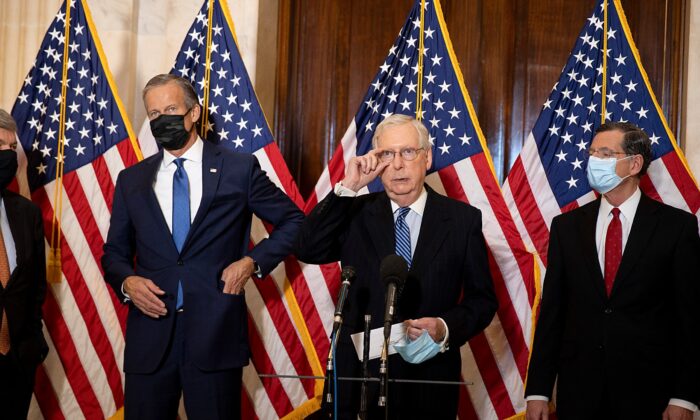 Senate Minority Leader Mitch McConnell (R-Ky.) said that Senate Bill 1 (S.1)—the For the People Act of 2021—is an attempt by Democrats to control the outcome of future elections by taking power away from state election officials.

“There’s no rational basis for a federal government takeover of all 50 states’ elections,” McConnell said in a social media statement Tuesday.

The U.S. Constitution gives the primary power of conducting elections to the state legislatures, with additional power to Congress to alter some laws related to running elections.

“The Times, Places and Manner of holding Elections for Senators and Representatives, shall be prescribed in each State by the Legislature thereof; but the Congress may at any time by law make or alter such Regulations, except as to the Places of choosing Senators,” states the Constitution (pdf) in Article I, Section 4: States Conduct Congressional Elections.

Congress has amended the Constitution several times to ensure all Americans have the right to vote, as seen in the 15th and 19th Amendments.

Opponents of S.1 argue that it is an extreme overreach by Congress to control how elections are run nationwide.

Hans von Spakovsky, who heads The Heritage Foundation Election Law Reform Initiative, said, “A better description of it [S.1] is that this bill would be a federal takeover and nationalization of the running and administration of elections, basically taking it away from the states.”

Sens. Jeff Merkley (D-Ore.) and Amy Klobuchar (D-Minn.), chairwoman of the Rules Committee who introduced S.1 in the Senate, say the legislation will end corruption in election funding by taking out dark money, as well as end voter suppression.

“That’s the only way we can realize our founders’ ‘We the People’ vision. We must tackle every obstacle, from partisan gerrymandering to massive sums of dark money, to voter suppression, that is keeping us from fully realizing the promise of an equal and just America,” said Merkley.

Unlike Democrats, conservatives like von Spakovsky say election laws should make it easier to vote and hard to cheat, but S.1 will invite fraud in elections.

“It [S.1] would change election rules to make it easier to cheat and easier to manipulate election results. And on the ethics and campaign finance rule changes, it’s designed to restrict and chill speech, political speech, and political activity,” said von Spakovsky.

“There’s a reason the framers of the Constitution gave the authority to the states to run elections. And the reason for that was they didn’t want the people who are in control in Washington, say one political party, which is apparently the case right now, changing the rules nationally to ensure that they remain in office,” added von Spakovsky.

“The best evidence of the political nature of this bill is that they want to take away from red states, where people are moving, the ability to draw lines. We’re going to pick up four or five seats as Republicans because of the census. Under this bill, this independent commission would take away from Florida, Montana, and Texas the ability to draw these lines. This has got nothing to do with improving voting. It has everything to do with locking in perpetual power by the left,” said Graham.

Senate Majority Leader Chuck Schumer (D-N.Y.) said the Senate will take a vote to start debate on S.1 on Tuesday, saying that Republicans at the state and federal level are trying to suppress people’s right to vote and validating former President Donald Trump’ claim that there was widespread voter fraud.

Schumer was making a reference to election laws being introduced by Republican state legislatures to make elections more secure and reverse some of the voting changes made during the pandemic, as well as address some of the irregularities that were found during the 2020 election ballot counting.

“It is spectacularly obvious that Republicans are making it harder to vote and easier to steal an election. The big lie that started with Donald Trump is infecting them,” Schumer said on the Senate floor. “Republicans across the country are trying to stop the other side from voting that tears—rips apart—the very fabric of our democracy.”

Senator John Thune (R-S.D.) said the vote in the Senate for S.1 will be just for show. “It’s designed purely and simply to score political points. Nothing more, nothing less.”