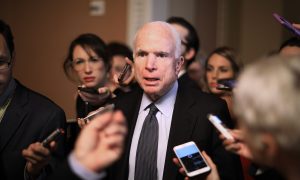 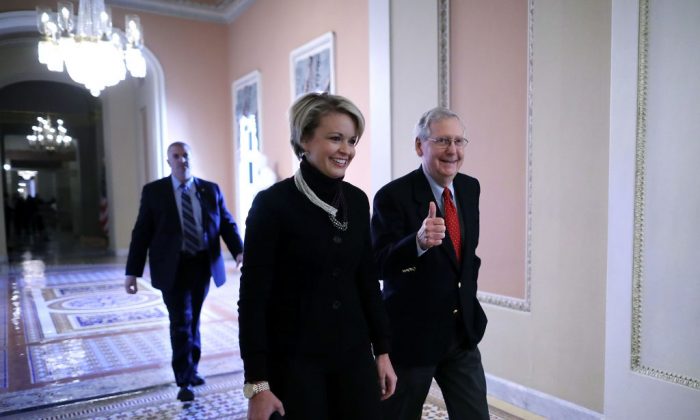 Senate Majority Leader Mitch McConnell (R-KY) gives a thumbs-up as he and his Director of Operations Stephanie Muchow head for the Senate floor at the U.S. Capitol in Washington, DC. on Dec. 1, 2017. Senate Republicans moved one step closer to delivering a tax reform bill to President Donald Trump before Christmas. (Chip Somodevilla/Getty Images)
Politics

WASHINGTON—The U.S. Senate passed a sweeping tax bill, a significant milestone for Republicans in getting tax reform over the finish line. The Republican-controlled Senate passed the Tax Cuts and Jobs Act by a vote of 51-49 in the early hours of Saturday, Dec 2.

Sen. Bob Corker of Tennessee was the only Republican who voted against the bill, citing concerns about the tax bill’s potential additions to the budget deficit.

All Democrats voted against the bill, arguing that the tax cuts benefit the rich over the middle-class and will swell the budget deficit over the next 10 years.

The U.S. House of Representatives passed its tax bill on Nov. 16, which diverges from the Senate’s plan. As a next step, both the Senate and the House would work together to draft a single bill.

House Republican leaders have scheduled a vote for Dec. 4 to go to conference with the Senate on the tax bill. For tax reform to become law, both chambers have to pass the same legislation and send it to the president.

Republicans have an ambitious schedule to turn the bill into law by the end of the year. If they succeed, it will be the first major tax reform since 1986.

“Biggest Tax Bill and Tax Cuts in history just passed in the Senate. Now these great Republicans will be going for final passage,” wrote President Donald Trump in a tweet on Dec. 2.

Biggest Tax Bill and Tax Cuts in history just passed in the Senate. Now these great Republicans will be going for final passage. Thank you to House and Senate Republicans for your hard work and commitment!

“Thank you to House and Senate Republicans for your hard work and commitment!”, he wrote.

Trump is confident that the chambers will work out their differences and pass tax reform as a Christmas gift to Americans.

Here is how the Senate bill compares to the House bill:

Both bills agree on reducing the corporate income tax rate from 35 percent to 20 percent, which is the centerpiece of this tax reform. But the Senate’s tax cut would only take full effect in 2019.

Some are concerned that the delay would disappoint businesses, which would put off investment. According to some experts, however, this delay in the tax cut could indeed boost investments.

They believe the full expensing provision of the tax bill is more important than tax cuts. Full expensing would allow companies to immediately deduct 100 percent of the cost of capital investments from their tax bill. Businesses will have larger tax savings from writing off the costs of their investments at high tax rates and a year later will pay lower taxes on the payoffs from those investments.

The Senate bill differs significantly from the House bill on pass-through entities, like partnerships and limited liability companies that pay taxes on business profit as personal income. With its revised version, the Senate provides a better relief for pass-throughs.

The Senate plan continues taxing pass-through entities at the individual rate, with a top proposed rate of 38.5 percent. But it allows a 23 percent business income deduction (up from 17.4 percent in the original Senate bill).

Republican senators Daines and Johnson who earlier voiced concern over how pass-through entities were to be taxed, said yes to the Senate’s bill after securing further tax relief for these businesses.

The House bill, by contrast, caps the pass-through tax rate at 25 percent. It also sets anti-abuse rules that allow only 30 percent of a company’s revenue to be eligible for that rate and the other 70 percent to be treated as wage income subject to the individual tax rate.

To avoid individuals abusing the lower tax, both bills have guardrails, which include the exclusion of professional services. Many service providers such as consulting, law, and financial services companies cannot benefit from preferential treatment.

Both tax bills want to level the playing field between U.S. and foreign companies. So they both move from a worldwide taxation system—which taxes income earned anywhere in the world—to a territorial system, only taxing income earned inside the home country.

As a transition to the territorial system, there will be a one-time tax payable on profits U.S. multinationals have already accumulated overseas. The Senate bill proposes a rate of 14.5 percent (up from the 10 percent originally proposed) for liquid assets and 7.5 percent (versus 5 percent originally planned) for other assets. These rates are slightly higher than the House’s proposal.

Both the House and Senate tax reform bills include significant rules to limit tax avoidance, such as the strategy of base erosion and profit shifting, which is used by companies to artificially shift profits to low- or no-tax countries.

The Senate bill keeps the seven individual tax brackets while the House bill condenses them for simplicity. The Senate bill reduces the rates on taxable income to:

The House bill, by contrast, condenses the current seven tax brackets down to four: 12 percent, 25 percent, 35 percent, and 39.6 percent. And it increases income limits for each tax bracket.

In addition, both the Senate and House bills nearly double the standard deduction. In the Senate bill, the deduction increases from $6,350 to $12,000 for individuals and from $12,700 to $24,000 for married couples filing jointly.

5. Repeals the deduction for state and local taxes (SALT)

The Senate bill repeals the deduction for SALT and allows deductions up to $10,000 for property taxes, in line with the House.

In the original version of the bill, the Senate entirely repealed the deduction for SALT and had no exception for property taxes. However, Sen. Susan Collins (R-Maine) who has been pushing for an amendment allowing property tax deduction, announced the change in the bill via Twitter.

“The Senate tax bill will include my SALT amendment to allow taxpayers to deduct up to $10,000 for state and local property taxes,” she wrote in a tweet on Dec. 1.

Those who benefit from the SALT deductions are mostly taxpayers in high-tax states, and hence this provision drew a lot of criticism from states like New York, New Jersey, and California.

In addition, the Senate would keep a number of popular tax credits and deductions that would be repealed by the House tax bill, including medical expenses, teacher expenses, and student loan interest.

8. Keeps the estate tax (death tax) but doubles the threshold

The Senate proposal keeps the estate tax and doubles the threshold for the value of inheritance to $11.2 million.

The House bill, in contrast, increases the threshold to $10 million and eliminates it completely in six years’ time.

Senate Republican leaders decided on Nov. 14 to include the repeal of Obamacare’s individual mandate in the revised version of the bill. The individual mandate provision requires most Americans to have a basic level of health insurance coverage or else pay a tax penalty.