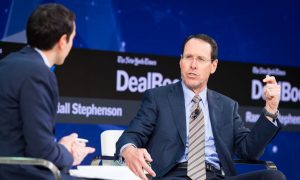 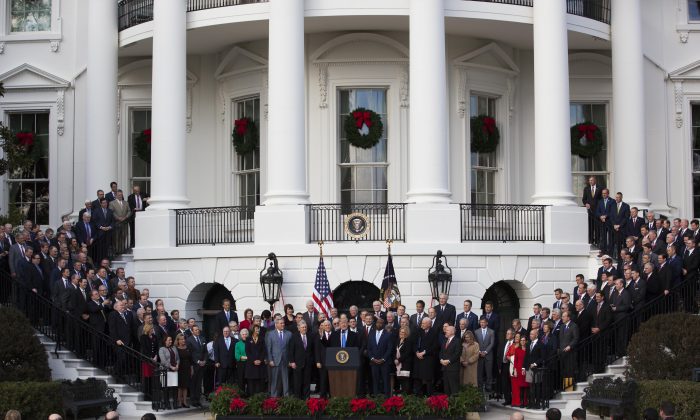 President Donald Trump celebrates the passage of the tax bill, while flanked by members of Congress, on the South Lawn of the White House in Washington, Dec. 20, 2017. (Charlotte Cuthbertson/The Epoch Times)
Politics

WASHINGTON—Congress voted in favor of President Donald Trump’s landmark tax plan on Dec. 20, paving the way for the first sweeping rewrite of the U.S. tax code since the Reagan years.

“It’s the largest tax cut in the history of our country,” said Trump at the White House during an afternoon event marking the bill’s passage.

The bill will provide “$3.2 trillion in tax cuts for American families, including doubling the standard deduction and doubling the child tax credit,” said Trump.

The bill, which is the first major legislative triumph of the Trump administration, passed both houses of Congress on Dec. 20.

After reconciling differences between the House and Senate bills, Republicans in conference agreed on their final legislation on Dec. 15.

The House of Representatives passed the bill first on Dec. 19, but had to revote the next day due to a procedural glitch in the Senate.

In the early hours of Dec. 20, the Senate voted 51–48 in favor of the revised bill, followed by a second approval in the House with a vote of 224–201 in the early afternoon.

The only Republican holdout, Sen. Bob Corker (R-Tenn.)—who opposed the bill last month—also voted in favor of the final bill. Corker told reporters that he felt tax reform was a once-in-a-generation opportunity and that the nation would be better off with the tax cuts than without. Sen. John McCain (R-Ariz.) missed the vote for health reasons.

Trump and Republican leaders have repeatedly underlined that the principal objective of their tax reform is delivering relief to the middle class.

This April 15th will be the last time you ever file your taxes under this horrible broken tax code because you’ll have a new one.
— Kevin Brady, chairman, House Ways and Means Committee

Some economists argue the new bill will significantly boost business investments, leading to higher economic growth and more jobs. Cutting the corporate tax rate from 35 percent to 21 percent, and attracting U.S. cash parked overseas, will conservatively boost the median wage by $4,000 a year, according to Kevin Hassett, chairman of the Council of Economic Advisers.

Here’s a rundown of what’s in the new tax bill for individuals:

“This April 15th will be the last time you ever file your taxes under this horrible, broken tax code, because you’ll have a new one,” said House Ways and Means Committee Chairman Kevin Brady (R-Texas).

The bill narrows itemized deductions to simplify the tax code. However, it nearly doubles the standard deduction for individuals from $6,350 to $12,000 and for married couples filing jointly from $12,700 to $24,000.

“Just doubling the standard deduction means nine out of 10 people can fill the taxes on a form like a postcard,” said Speaker of the House Paul Ryan (R-Wis.) during a press conference on Dec. 14.

Many individual income tax provisions, including the child tax credit, will expire by the end of 2025, and the old rules will take effect, unless the provisions are extended.

Instead of fully repealing the deductions for SALT, as initially proposed by the Senate, the legislation caps it at $10,000. The bill will enable deductions up to $10,000 and give taxpayers the option to choose among sales, income, and property taxes.

For graduate students, the final bill continues to exempt the value of reduced tuition from taxes. In addition, 529 savings accounts, which are currently used for college expenses, will now be available for expenses at K-12 private schools, including religious schools.

There will be no changes to 401(k)s and individual retirement accounts (IRAs). The bill also increases the exemptions amount from the alternative minimum tax, to reduce the complexity of the tax code.

Keeps the Estate Tax (Death Tax) but Doubles the Threshold

In line with the Senate’s proposal, the final bill retains the estate tax and doubles the threshold for the value of inheritance to $11.2 million. In addition, the bill continues and expands the deduction for charitable contributions.

Under the new plan, middle-income families that earn between $20,000 to $100,000 a year, will pay $61 billion less in taxes in 2019, according to a report released on Dec. 18 by the Joint Committee on Taxation (JCT), a congressional committee. The middle class accounts for about half of all individual tax filers and pays nearly 21 percent of taxes under both the new plan and present law, according to the same report.

Opponents of tax reform think the wealthy do not pay their fair share. Affluent households, earning $500,000 or more a year, account for 1 percent of tax filers and pay more than 27 percent of all taxes under both plans, according to the JCT analysis. So their share of taxes will not change. This group will receive nearly $61 billion in tax cuts in 2019, according to the same study. This amount includes the individual share of pass-through businesses such as partnerships and S-corporations.

Those who pay more taxes will benefit the most from tax cuts in dollar terms.

“From a practical standpoint, the more tax you pay, the more you benefit from rate reductions. This is math. There’s nothing you can do about it,” said Roger Harris, president of Padgett Business Services, a small-business tax advisory firm based in Athens, Georgia.

The tax cuts are not as popular as one would expect. According to a recent poll conducted by Quinnipiac University, 55 percent of Americans surveyed disapprove the tax plan. Only 16 percent said they would benefit from tax cuts.

This is a natural reaction to any major legislation like tax reform, said Ryan during the press conference.

He said that one month before Ronald Reagan’s signature 1986 tax reform passed, only 18 percent of people polled thought they were going to benefit from it.

There are “pundits” and “spinmeisters” who confuse the public on tax reform, he said.

AT&T Will Give Employees $1000, Invest $1 Billion in US, After Tax Reform Passes

Due to the complexity of reform and the circulation of misinformation, many taxpayers, especially individuals, are still not clear on how the tax bill will affect them.

“There are going to be winners and losers,” said Harris. “And everyone’s situation is going to be the determining factor.”

He thinks tax reform is necessary for the country, but he also recognizes that some businesses and some individuals aren’t going to benefit as much as others.

“That’s just the nature of anything of this magnitude. I don’t know what kind of law you can pass to reach a standard that benefits everyone equally,” he said.

The tax bill narrows deductions for state and local taxes, mortgages, and the personal exemption, while reducing the tax rates and doubling the standard deduction.

“People generally focus on the deductions or tax credits they would lose rather than the benefits they would get through the lower tax rates or higher standard deduction,” Harris said.

“Until you sit down and analyze how you’re impacted in total, it’s hard for you to know if you’re going to be better off or not.”