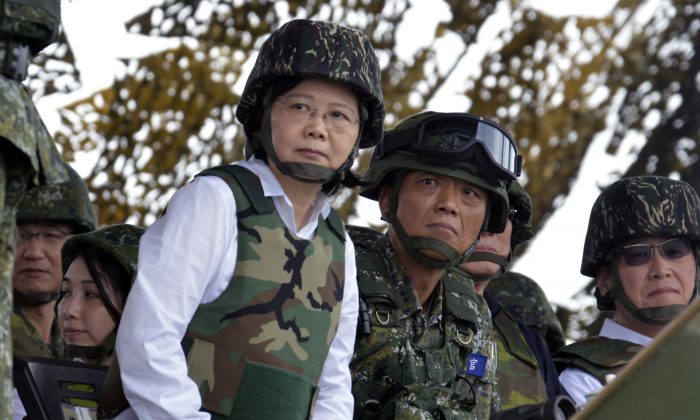 Taiwan’s President Tsai Ing-wen (C) watches during the 'Han Kuang’ military exercise, some 4 miles from the city of Magong on the outlying Penghu islands on May 25, 2017. (Sam Yeh/AFP/Getty Images)
By Paul Huang

In another show of support for Taiwan, the U.S. Senate passed its latest National Defense Authorization Act (NDAA), which contains a clause calling for the United States to participate in exercises with the Taiwanese military. Observers say this measure would demonstrate U.S. resolve against Beijing’s growing aggression toward the island nation.

The NDAA, which passed June 18 with an 85-10 vote, will now be the basis for negotiations with the House on a final bill. The annually renewed bill is a collection of policies and procedures that Congress makes for the Department of Defense’s programs and activities.

While the provisions on Taiwan are only a tiny part of the massive bill, it notably calls for U.S.–Taiwan joint military exercises, an idea that almost certainly will invite objections from China, which considers Taiwan one of its provinces.

Han Kuang is the code name for the annual Taiwanese military exercise that typically is held in spring or at the beginning of summer. The exercise usually focuses on preparing the country’s moderately sized military to repel an attack or outright invasion from the People’s Liberation Army (PLA), which has seen rapid growth and modernization in recent decades.

The bill only expresses the “the sense of the Senate” and as such does not legally compel the administration to act. Observers say however that it reflects the growing sense in the U.S. Congress of the need to push back against Beijing’s growing military provocations.

“It would be a meaningful step forward in enhancing U.S.–Taiwan defense cooperation and thus deterrence against China,” said Russell Hsiao, executive director of Global Taiwan Institute, who noted that “participation” needs to mean more than simply observing for such an act to have a greater effect.