House to vote on Friday 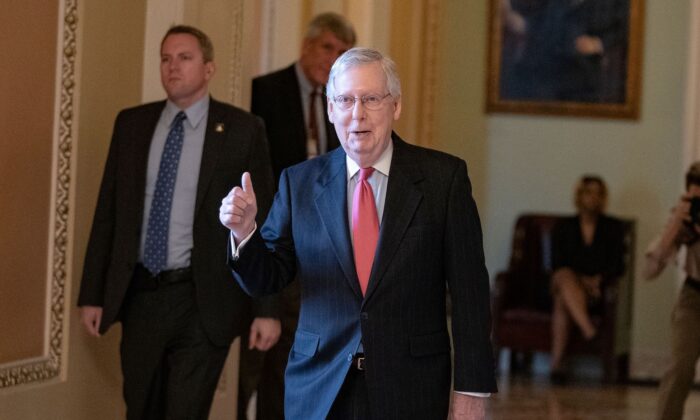 The 96-0 vote in the Senate means the bill will now move to the House of Representatives, which is expected to vote on Friday.

“I encourage the house to pass this vital legislation and send it to my desk for signature without delay. I will sign it immediately,” Trump said earlier on Wednesday during his daily White House Coronavirus Task Force briefing.

“The Senate is going to stand together, act together, and pass this historic relief package today,” said Senate Majority Leader Mitch McConnell (R-Ky.).

The 880-page measure, the third coronavirus response bill produced by Congress, is the largest-ever rescue package in U.S. history. It builds on previous funding efforts focused on vaccines and emergency response, sick and family medical leave for workers, and food aid.

The ‘‘Coronavirus Aid, Relief, and Economic Security Act’’ or the ‘‘CARES Act’’ (H.R. 748) includes $350 billion in job retention loans for small businesses that will supply eight weeks of salaries, with loan forgiveness available as long as businesses keep up with overheads and employing their workers.

It also includes a $500 billion program for guaranteed, subsidized loans to larger industries, including airlines.

Hospitals are expected to receive at least $100 billion to deal with the incoming flood of COVID-19 patients. The bill also provides $45 billion to fund additional relief efforts through the Federal Emergency Management Agency for local emergency response and community services.

The package also provides up to $250 billion in expanded unemployment benefits, intended to help replace the salaries of furloughed workers for up to four months. Furloughed workers will get whatever amount their state usually provides for unemployment, plus a $600 per week add-on. Independent contractors and those who are self-employed will, for the first time, be eligible for the benefits.

Several Republican senators on Wednesday insisted that the bill be amended to ensure that laid-off workers would not be paid more in unemployment benefits than they earn at their job. But an amendment that would have changed the provision failed just before the Senate approved the relief package.

The pandemic has killed more than 1,000 people in the United States and infected more than 69,000 to date, according to data from Johns Hopkins University.

Confirmed cases of the CCP virus continue to rise in the United States as testing improves and testing centers work through the backlog in samples.