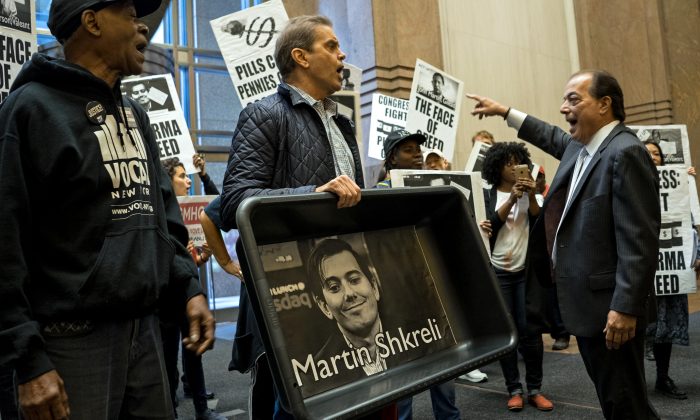 AIDS activists and others, carrying an image of Turing Pharmaceuticals CEO Martin Shkreli in a makeshift cat litter pan, are asked to leave the lobby of 1177 6th Ave. in New York, during a protest highlighting pharmaceutical drug pricing, on Oct. 1, 2015. (AP Photo/Craig Ruttle)
Business & Markets

WASHINGTON—A Senate committee has launched an investigation into exorbitant drug price hikes by Turing Pharmaceuticals and three other companies, responding to public anxiety over rising prices for critical medicines.

The Senate’s special committee on aging requested documents and information Wednesday from Turing, Valeant Pharmaceuticals and two other drugmakers already under scrutiny for recent price spikes.

Notably, the senators called for a face-to-face meeting with Turing Pharmaceuticals CEO, Martin Shkreli, “as soon as it is practicable.” A former hedge fund manager, Shkreli has become the public face of the pricing controversy, after his company raised the price of the anti-infection drug Daraprim by more than 5,000 percent. The drug, which Turing acquired in August, is the only U.S.-approved treatment for a deadly parasitic infection that can affect pregnant women and patients with HIV.

Turing said in an emailed statement: “We are reviewing the committee’s request and, as we have and continue to do with similar congressional inquiries, we look forward to having an open and honest dialogue about drug pricing.”

Both Turing and Valeant have also received multiple subpoenas from federal prosecutors seeking information about drug pricing and other policies.

Separately, Democrats in the House of Representatives called on their Republican colleagues to summon the Turing and Valeant CEOs to a congressional hearing and issue subpoenas to collect documents from their companies. Both firms have refused to turn over documents requested by Democrats on the House oversight committee.

Valeant is already under investigation by several members of Congress for its general business strategy, which involves buying smaller drug developers and then jacking up the prices of their medicines.

Both Turing and Valeant have also received multiple subpoenas from federal prosecutors seeking information about drug pricing and other policies.

Senators Susan Collins, R-Maine, and Claire McCaskill, D-Missouri, said a hearing on the issue is tentatively scheduled for Dec. 9. Collins chairs the aging committee and McCaskill is its ranking Democrat.

“We need to get to the bottom of why we’re seeing huge spikes in drug prices that seemingly have no relationship to research and development costs,” said McCaskill, in a statement. She added that some of the increases resemble “little more than price gouging.”

The committee also sent letters to Retrophin Inc. of San Diego and Rodelis Therapeutics of Alpharetta, Georgia. The lawmakers question Retrophin about its decision to raise the price of a kidney drug, Thiola, from $1.50 per tablet to $30 per tablet. Company shares tumbled roughly 13 percent in trading Wednesday to $18.90.

The letter to Rodelis questions the company’s price increase on a tuberculosis drug by more than 2,000 percent to $10,800 per bottle.

The Senate aging committee was initially formed to oversee Social Security, Medicare and other programs for seniors. It has no authority to write laws but often investigates industries that prey on seniors.

Last week a national poll found that sky-high drug prices remain the No. 1 health concern among Americans, according to the nonpartisan Kaiser Family Foundation. Responding to this public outrage, Democratic presidential candidates Hillary Clinton and Bernie Sanders have each laid out plans to use federal authority to curb price increases.

Overall, prescription drug prices have been on the rise for years. Between 2008 through 2014, average prices for the most widely used brand-name drugs jumped 128 percent, according to prescription benefit manager Express Scripts Holding Co. In 2014, the company estimated that total U.S. prescription drug spending increased 13 percent. Reasons include increasing research costs, insufficient competition and drug shortages.

Shares of Valeant Pharmaceuticals fell 6 percent to $91.98 in trading. The Quebec, Canada-based company’s stock has lost more than 60 percent of its value since August amid controversy about drug pricing schemes and ties to specialty pharmacy Philidor Rx Services. Philidor said last week it would shut down after Valeant and several major customers stopped dealing with the company amid questionable business practices.