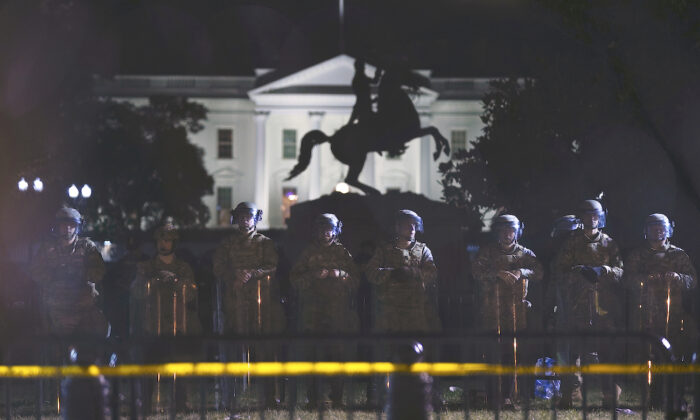 With the White House in the background, a line of police forms behind a fence in Lafayette Park as demonstrators gather in Washington on June 2, 2020. (Evan Vucci/AP Photo)
Politics

In a late-night action Wednesday, the Senate Armed Services Committee voted to add a provision to the defense bill which would permanently bar the U.S. military from being used to stop peaceful protestors.

The committee added Sen. Tim Kaine’s (D-Va.) provision, as an amendment to the panel’s annual National Defense Authorization Act (NDAA) FY2021, which was done in closed session. The amendment bill, had bipartisan support and will now advance to the full Senate for consideration.

“I never thought we would have to use the NDAA to make clear that the U.S. military shouldn’t be used as an agent of force against American citizens who are lawfully assembling,” said Kaine in a statement.

The Virginia senator, along with many other Democrats, saw the use of force used against protestors outside the White House in Lafayette Square as a breach of citizens’ first amendment rights.

“But the thought that we would go beyond that, and now have it be the military who might have to do that. I’m not going to stand for it,” he added.

“There’s no regrets on the part of this White House,” McEnany said at a briefing Monday afternoon. “I’d note that many of those decisions were not made here within the White House. It was [Attorney General William] Barr who made the decision to move the perimeter. Monday night Park Police had also made that decision independently when they saw all the violence in Lafayette Square.”

Looting, vandalism, and violence broke out in some areas after the death of George Floyd, a black man who died in police custody on May 25 after a Minneapolis officer knelt on neck for nearly 9 minutes. A video of the incident circulated widely and drew condemnation across the country.

In many major cities including Minneapolis, some of the peaceful protests turned violent, where public buildings were vandalized, burned, and looted. In response, President Donald Trump called National Guard troops.

Trump had stated he would consider using the Insurrection Act (to use the U.S. Military troops) if local leaders could not squelch the violence. Ultimately the Insurrection Act was never enacted because the National Guard presence helped prevent further destruction of property, theft, and police being harmed.

Barr said the decision was made in response to violent riots in Lafayette Square over the previous few days and that Barr said that it was made before he knew that Trump was going to speak there, adding that it was “not an operation to respond to that particular crowd.”

“On [May 31], things reached a crescendo. The officers were pummeled with bricks. Crowbars were used to pry up the pavers at the park and they were hurled at police. There were fires set in not only St. John’s Church, but a historic building at Lafayette was burned down,” he said.