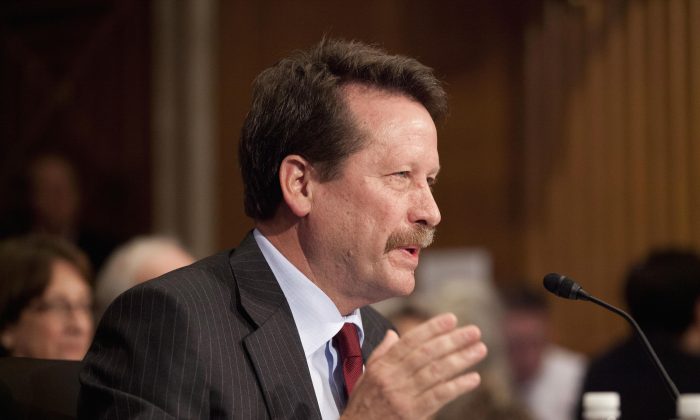 WASHINGTON—President Barack Obama’s nominee to lead the Food and Drug Administration defended his record Tuesday as senators pressed him about rising drug prices, slow approval times for new drugs and his ties to the pharmaceutical industry.

Dr. Robert Califf, 64, is currently the No. 2 official at the agency, which regulates consumer products from medications to seafood to e-cigarettes. He joined the FDA as deputy commissioner earlier this year after more than 30 years as a prominent cardiologist and medical researcher at Duke University.

At his confirmation hearing in the Senate Health, Education, Labor and Pensions Committee, most senators signaled support for his nomination, though some Democrats raised concerns about Califf’s ties to industry. In 2006, Califf founded the Duke University Clinical Research Institute, a contract research group that has conducted studies for virtually all of the world’s largest drugmakers.

Vermont Sen. Bernie Sanders, a Democratic presidential candidate, told Califf he would oppose his confirmation because he isn’t “strong enough” on the issue of lowering drug prices.

“I believe we need a commissioner who is going to stand up to the pharmaceutical industry and protect American consumers,” Sanders said. “You are not that person.”

Outside the hearing, Sanders said he would consider holding up Califf’s nomination.

Sen. Elizabeth Warren (D-Mass.) asked how much influence pharmaceutical companies had over his studies and said she’d be requesting copies of some of his contracts with those companies. She said his ties raise questions because many drug companies complain the FDA is too tough on them.

“I think if you look at my record you’ll find I’ve never been a proponent of lowering standards,” Califf said. He said he declined to do many studies because drug companies wouldn’t meet his criteria for data access.

Califf has already recused himself from dealing with certain companies to avoid conflicts of interest.

Tennessee Sen. Lamar Alexander, the Republican chairman of the committee, said Califf has been thoroughly vetted and he is confident that he can lead the agency “fairly and impartially.”

Still, Alexander also questioned Califf about drug prices, saying he would like to see faster approvals of generic drugs at the agency, a move that could help lower drug prices even though the FDA doesn’t control them. Califf responded that approval times will speed up as the agency works its way through an application backlog.

On medical devices, Califf called for a system to collect reports of side effects similar to one that already exists for drugs. He said that might have helped detect earlier problems with medical scopes that were linked to “superbug” bacteria outbreaks at hospitals around the country.

As head of the FDA, Califf would inherit a raft of projects and potential challenges, including unfinished tobacco regulations and food safety and labeling reforms.