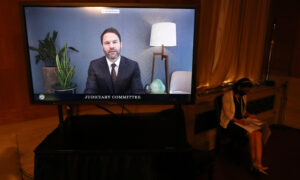 A Senate chairman plans on sending subpoenas to the CEOs of three technology giants amid a push to alter the liability protections that currently shield the companies from lawsuits.

Many Republican lawmakers, as well as President Donald Trump’s administration, are focused on altering liability protections implemented in 1996 by Section 230 of the Communications and Decency Act.

The Department of Justice submitted a proposal last week that would sharply curb the protections, citing how large technology companies like Google, Twitter, and Facebook are increasingly cracking down on some users, in certain instances motivated by political bias.

Section 230 “has undeniably allowed the modern Internet to flourish,” Wicker said before the vote on the subpoenas.

“However, following repeated and consistent reports of political bias, and the suppression of certain viewpoints, I fear that Section 230’s sweeping liability protections for big tech are stifling a true diversity of political discourse on the Internet,” he added, pointing to Pew Research surveys that show a majority of U.S. adults say it’s likely that social media sites censor political viewpoints.

“On the eve of a momentous and highly charged election, it is imperative that this committee of jurisdiction and the American people receive a full accounting from the heads of these companies about their content moderation practices.”

Wicker pointed out that both Trump and Democratic presidential nominee Joe Biden have said Section 230 protections need to be reviewed.

Sen. Maria Cantwell (D-Wash.), the ranking member on the committee who last week said she opposed the subpoenas, indicated she’d changed her mind.

“I actually can’t wait to ask Mr. Zuckerberg further questions,” she said, adding that “the issues that we are discussing of how we function in an information age are of extreme importance,” as well as privacy and “media domination by the platforms.”

Cantwell said she worried that oversight could have a “chilling effect” on how platforms are trying to crack down on “hate speech” but welcomes a debate over Section 230 and hopes a long and thoughtful process will take place examining it.

The three motions authorizing the subpoenas were approved on a voice vote, with no senators dissenting.

The Senate hearing is expected to take place before the Nov. 3 election.