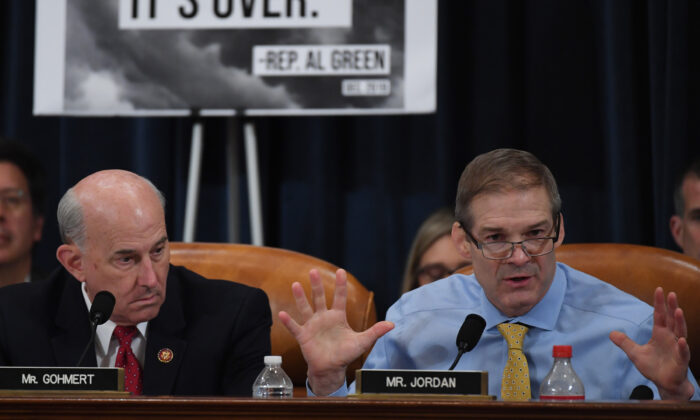 Over the past week, Senate Republicans have signaled that there may be no witnesses during the Senate impeachment trial, contrary to suggestions of the Trump administration, in a move that drew blowback from some House Republicans.

Rep. Louie Gohmert (R-Texas) told reporters on Friday that “I sure hope” the Republican-controlled Senate will “clean this mess up” during a trial to exonerate President Donald Trump. The “country needs to hear what a farce this was,” he said of the House Democrat-led process, adding that the “Senate promised for months now they would have witnesses.”

A Senate trial without witnesses would be a “big mistake,” Gohmert remarked.

During a Thursday night interview with Sean Hannity on Fox News, Senate Majority Leader McConnell  (R-Ky.) said the White House counsel may or may not want to call up their own witnesses but insisted there’s “no chance” Trump will be removed. Meanwhile, Senate Judiciary Chairman Lindsey Graham (R-S.C.) described the entire impeachment push as a face and said he wanted to call up no witnesses to “end this thing as quickly as possible.”

Sen. Ron Johnson (R-Wis.) told Bloomberg News that a trial “could be a pretty messy and unproductive process … that’s generally where people are heading toward.”

Another member of the House Judiciary panel, Rep. Mike Johnson (R-La.), suggested that Trump needs to get a chance to defend himself in Congress’s upper body.

Trump “may not get a chance to put on his witnesses and put on his defense” during a Senate trial, but “we’re going to do it to our constitutions and the American people every chance [we get],” he told reporters.

Rep. Jody Hice (R-Ga.) said Thursday he hopes the Senate will hold an “authentic” trial to push back against what he called a “one-sided partisan hoax from the very beginning” by the Democrats, reported The Hill.“My hope would be is that the Senate, once it gets to them, they have an authentic trial and they call witnesses that the administration would like to cross-examine and so forth. And let’s have a real trial.”

But Rep. Mark Meadows (R-N.C.), a close Trump ally, told Politico that he trusts McConnell’s judgment and doesn’t want to “second-guess” the Senate.

“The president is talking about wanting witnesses to make sure that at least our witnesses get heard to tell the other side of the story,” Meadows said. “That being said, if the leader and my Republican colleagues in the Senate think it’s best to be expeditious with it … the quicker we can get on with this and get on to real business, I’ll applaud.”

A two-thirds majority would be needed to convict the president in the Senate, but just 51 votes are needed to decide on calling up witnesses. The Judiciary Committee on Friday voted to approve two articles of impeachment, which will then be sent to the House floor. It’s not clear how many Democrats will vote against the measure.

The House, meanwhile, is expected to vote on articles of impeachment before the Christmas break before sending it to the Senate.