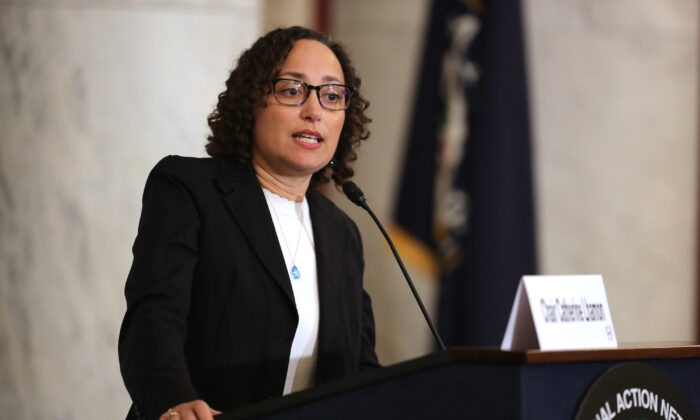 Catherine Lhamon will return to lead the U.S. Department of Education’s Office for Civil Rights after the Senate narrowly confirmed her appointment in a party-line vote, with Vice President Kamala Harris breaking the 50-50 tie.

The Wednesday vote came more than five months after Lhamon was tapped by President Joe Biden as the nominee for assistant secretary for civil rights, a position she held under the Obama administration from 2013 to 2016. The nomination was then stalled in August following a deadlock in the Senate education committee.

Lhamon is expected to play a key role in the Biden administration’s overhaul of rules regarding Title IX, the federal law prohibiting sex-based discrimination in educational settings.

The Biden administration’s efforts include expanding Title IX protections to cover gender identity and sexual orientation, and potentially rolling back rules made by former Education Secretary Betsy DeVos, who bolstered due process rights of those accused of sexual misconduct and limited the scope of cases that colleges have to investigate.

Lhamon criticized the Title IX rule when it was finalized last year, saying it would send colleges back to a time when it was “permissible to rape and sexually harass students with impunity.”

The Democrats celebrated the confirmation, praising Lhamon as a champion of civil rights.

“With this confirmation, our nation has once again gained a champion who will work each day to ensure that our public schools and institutions of higher education become ever fairer and more just,” Education Secretary Miguel Cardona said in a statement. “Catherine is one of the strongest civil rights leaders in America and has a robust record of fighting for communities that are historically and presently underserved.”

The Republicans, however, find Lhamon’s record of leading the OCR troubling. North Carolina Sen. Richard Burr, the top Republican on the Senate Education Committee, accused Lhamon of “pushing a highly partisan, politicized agenda” during her tenure and “overstepping” her authority.

“She oversaw policies that led to hundreds of violations of students’ due process rights, resulting in more than 300 legal challenges,” Burr said in a press release prior to the Wednesday vote. “When Secretary DeVos issued the Title IX rule on campus sexual assault, Ms. Lhamon responded with inflammatory, divisive rhetoric that in itself should be disqualifying.”

“In her previous tenure, she made it clear she believed her guidance to schools was ‘binding’ and she worked to enforce it as though it were law,” Burr added, arguing that it was “inexcusable” for an unelected official to not understand the limits of her authority.

The incident Burr referred to took place in a 2014 Senate hearing. When now-retired Sen. Lamar Alexander (R-Tenn.) questioned Lhamon on where she acquired the authority to treat OCR guidance as if they were binding, Lhamon replied that, “Well, with gratitude, you did when I was confirmed.”