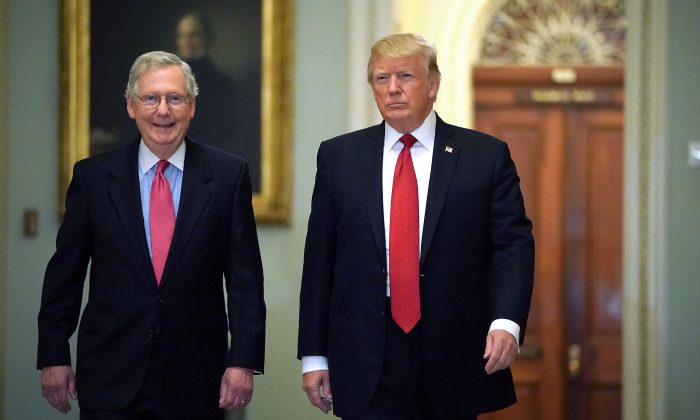 Senate Majority Leader Mitch McConnell (R-Ky.) said on June 5 that he was canceling most of the Senate’s August recess to give lawmakers time to pass spending bills before a Sept. 30 deadline and to confirm more of President Donald Trump’s appointees.

“Due to the historic obstruction by Senate Democrats of the president’s nominees and the goal of passing appropriations bills prior to the end of the fiscal year, the August recess has been canceled,” McConnell said in a statement.

McConnell said that the Senate will be in recess during the first week of August before returning for the rest of the month.

My statement on cancelling the August recess: pic.twitter.com/yyAEUSMVQW

The House of Representatives is still scheduled to take August off.

White House press secretary Sarah Sanders regularly brings up the confirmations backlog prior to daily briefings. Trump used his most recent weekly address to slam Democrats for obstructing his nominees.

“Senate Democrats call it ‘The Resistance.’ They’re resisting the will of the American voters, and it is not good,” Trump said in the weekly address on June 2. “From day one, the Senate Democrats have shamelessly obstructed, stalled, and filibustered the confirmations of hundreds of talented men and women who are eager to come to Washington, D.C., to make a difference.”

On average, the Senate has taken 86 days to confirm a Trump nominee, more than any of the four previous presidents, according to the Partnership for Public Service. The Senate has so far confirmed 448 of Trump’s nominees, far fewer than for any of the previous four presidents.

As an example, Trump brought up the nomination of Isabel Patelunas to be the assistant secretary for intelligence and analysis. Patelunas has been awaiting confirmation for nearly a year, despite having nearly three decades of intelligence experience and receiving the support of Director of National Intelligence Daniel Coats.

“She’s given up so much … and she’s still not confirmed. It’s a disgrace,” Trump said.

By Sept. 30, the end of the fiscal year, Congress needs to pass a dozen individual appropriations bills to keep the federal government fully operating.

The bills are usually combined into one omnibus bill, but it rarely gets passed by the deadline. Instead, a series of stop-gap spending bills are often enacted until lawmakers reach a deal on all the spending measures.

The last omnibus was finally passed in March, but it was so massive and costly that Trump almost refused to sign it. “I will never sign a bill like this again,” he said on March 23.

This year, GOP lawmakers plan to bundle the spending bills into smaller packages.

But last year’s omnibus came so late that time is already running out for pushing all the spending packages through all the committees and both chambers of Congress. Something had to give, and McConnell picked the recess.

A senior Senate Democratic aide complained that canceling the recess will keep off the campaign trail several Democrats who are locked in tough campaigns for reelection during the Nov. 6 midterms.

The August recess dates back to times before air conditioning when Washington became unbearably hot in the summer. But after the work conditions improved, the recess remained, allowing lawmakers to decompress, take foreign trips, campaign for reelection, and ramp up fundraising.