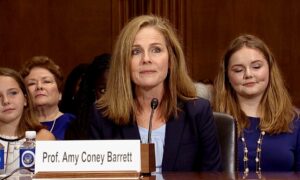 Revisiting What Barrett Said During Her 2017 Confirmation Hearing
0 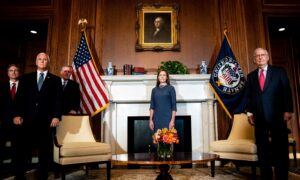 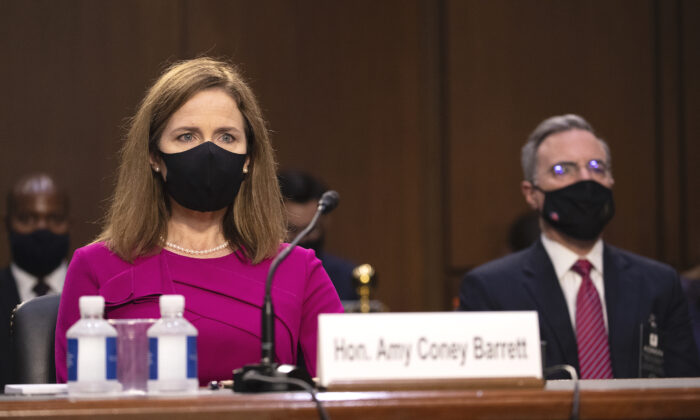 The confirmation hearings for Supreme Court nominee Judge Amy Coney Barrett began Monday morning in what is expected to be a fierce partisan fight on Capitol Hill to decide the future of the nation’s top court.

The hearing on Monday will be the first of a four-day process as part of an ambitious timeline set by Senate Republicans to confirm President Donald Trump’s third Supreme Court nominee before the election.

Monday’s hearing kicked off with opening statements by Judiciary Committee members. Sens. Todd Young (R-Ind.) and Michael Braun (R-Ind.) and Patricia O’Hara, a former Notre Dame Law School professor, will also speak during the session, according to the schedule. Barrett will also deliver her opening statement later in the hearing.

Questioning of the nominee will begin on Tuesday and will be followed by testimony from outside witnesses.

Committee Chairman Lindsey Graham (R-S.C.) opened the hearings saying he expects it to be a “long contentious week.” He then called for civility by committee members.

Meanwhile, Ranking Member Dianne Feinstein (D-Calif.) and many of her Democrat colleagues tied Barrett’s nomination to a threat to health care for Americans. Several Senate Democrats have used examples of Americans who are suffering from serious illnesses who rely on the Affordable Care Act (ACA), also known as Obamacare, saying the patients would lose their health care if the ACA is struck down.

“Health care coverage for millions of Americans is at stake with this nomination,” Feinstein said.

The Supreme Court is scheduled to hear a lawsuit, California v. Texas, challenging the ACA on Nov. 10. A number of Republican majority states are arguing that the invalidation of the “individual mandate” provision renders the whole ACA invalid.

The hearings are taking on a hybrid format with teleconference calls from members connecting remotely in order to accommodate requirements due to the Chinese Communist Party (CCP) virus, commonly called the novel coronavirus. Two committee members, Reps. Mike Lee (R-Utah) and Thom Tillis (R-N.C.), have recently tested positive for COVID-19, the disease caused by the virus. Lee was present in the hearing room on Monday to deliver his opening statement.

Senate Republicans are expected to push forward to swiftly confirm Barrett, while Senate Democrats want to stall the hearings, arguing that the next president should be able to pick who fills the vacancy on the top court. Republicans currently hold a 53-47 majority, meaning they effectively have the numbers needed to confirm a nominee with a simple majority. Although some Senate Republicans have said they would not vote to confirm the nominee, Senate Judiciary Committee Chairman Lindsey Graham (R-S.C.) indicated in September that his party has enough votes.

Barrett’s potential confirmation is likely to solidify a conservative majority on the Supreme Court for years to come. Her nomination sparked an intense political battle between groups and lawmakers who wanted to block her from or swiftly confirm her to the Supreme Court bench.

The judge is expected to elaborate on her judicial philosophy in her opening statement, saying that she is a proponent of the late Justice Antonin Scalia’s legal theories, according to her pre-written remarks.

“Courts have a vital responsibility to enforce the rule of law, which is critical to a free society,” she wrote. “But courts are not designed to solve every problem or right every wrong in our public life. The policy decisions and value judgments of government must be made by the political branches elected by and accountable to the People. The public should not expect courts to do so, and courts should not try.”

Carrie Severino, president of the conservative Judicial Crisis Network, previously told The Epoch Times that because Barrett’s confirmation will have a significant bearing on the ideological balance of the nation’s top court for decades, the judge is expected to face intense resistance from critics during the hearings.

The importance of Barrett’s nomination, she said, is similar to Justice Brett Kavanaugh’s nomination, who was nominated to replace Associate Justice Anthony Kennedy, the former swing justice on the court.

She added that senators could try to ask “trick” questions designed to illicit perjury, as well as items from Barrett’s record such as cases that she ruled on during her three years as an appeals court judge.

Meanwhile, senators from both sides of the aisle are likely to also compel Barrett to commit to voting a certain way in a particular case, or types of cases, Severino said, adding that if Barrett refuses, they could frame it as “she’s dodging questions, she’s trying to hide.”

“Either way, I can tell you ahead of time, she’s not going to be able to answer those questions, because as a federal judge, there are ethical guidelines that say you can’t commit to how you would vote in a future case likely to come before you,” Severino said.

“This is a long-standing feature of Supreme Court hearings,” she added.

After her clerkships, she was an associate at law firm Miller, Cassidy, Larroca & Lewin in Washington, D.C. for a year, and later moved to Texas-based firm Baker Botts in 2000, before leaving for academia.

In 2002, she became a professor at Notre Dame Law School, where she taught constitutional law, the federal courts, and statutory interpretation.

Barrett, who is a Catholic, has seven children with her husband, two of whom are adopted from Haiti. Her husband, Jesse Barrett, serves as an assistant U.S. attorney for the Northern District of Indiana.

In terms of her judicial philosophy, she has been described as an originalist and textualist, a judge who promises to interpret the U.S. Constitution or statutes based on what the original authors intended at the time of ratification and puts weight on the actual text of the law.

She told Senators in 2017 that if there was ever a conflict between a “judge’s personal conviction, and that judges duty under the rule of law,” the judge is “never ever permissible” to “follow their personal convictions” rather than “what the law requires.”