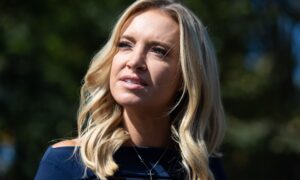 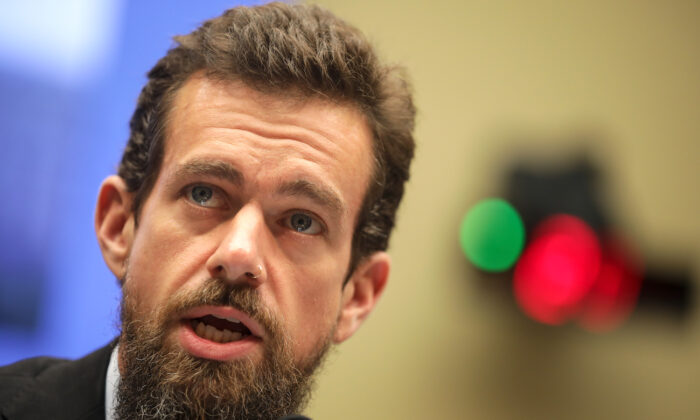 Jack Dorsey testifies during a hearing about Twitter's transparency and accountability, on Capitol Hill, in Washington on Sept. 5, 2018. (Drew Angerer/Getty Images)
2020 Election

The panel voted 12–0 to compel the testimony of Dorsey and Zuckerberg. Democrats on the committee had boycotted the session in protest of the committee’s earlier vote to advance the nomination of Judge Amy Coney Barrett to the Supreme Court.

Dorsey and Zuckerberg faced criticism last week after the Post article was blocked from being shared. The Post’s Twitter account is still locked, and editors for the publication have said a Twitter spokesperson told them to delete articles about Hunter Biden before it can be unlocked.

Dorsey and a company spokesperson last week announced the tech company would alter its content moderation policy following the backlash.

“Straight blocking of URLs was wrong, and we updated our policy and enforcement to fix. Our goal is to attempt to add context, and now we have capabilities to do that,” he wrote on the social media website.

A Facebook spokesman, Andy Stone, announced the reach of NY Post’s article would be limited.

“While I will intentionally not link to the New York Post, I want be clear that this story is eligible to be fact checked by Facebook’s third-party fact checking partners,” Stone wrote on Twitter. “In the meantime, we are reducing its distribution on our platform.”

A week ago, Senate Judiciary Republicans said Twitter’s move to block sharing of the content amounted to censorship and election interference.

“This is election interference, and we are 19 days out from an election,” Sen. Ted Cruz (R-Texas) told reporters on Oct. 15.

Graham noted that discredited information from a dossier compiled by former UK spy Christopher Steele wasn’t blocked by Twitter. Meanwhile, regarding the allegations that President  Trump colluded with Russia, “nobody blocked that,” he said. Social media firms, he argued, “have a dominance in our lives … they’re publishers” akin to newspapers or television broadcasters.

But Twitter’s recent actions “crystalizes the problem” of censorship “better than anything I can think of for the American people,” he said.

In its reporting, the Post said it received a copy of a hard drive with emails, photos, and other files from Rudy Giuliani, the personal attorney for President Donald Trump. That hard drive was first obtained from a computer repair shop in Wilmington, Delaware.

The newspaper also reported that Hunter Biden, who sat on the board of Ukrainian gas firm Burisma Holdings, used the influence of his father to make lucrative deals with companies from Ukraine and China. Later, the elder Biden told a Council on Foreign Relations panel that he forced the ouster of a Ukrainian prosecutor who was investigating Burisma, although Biden said it was because the official wasn’t pursuing corruption.

Biden’s campaign has denied the report that he met with a Burisma official as part of an alleged influence-peddling scheme. Biden told reporters on Oct. 20 that there is “no basis” for the reports.

“None whatsoever,” Biden replied. “This is the same garbage Rudy Giuliani, Trump’s henchman—it’s a last-ditch effort in his desperate campaign to smear me and my family. Even the man who served with him on that committee, the former nominee for the Republican Party, said there’s no basis to this, and you know, the vast majority of the intelligence people have come out and said there’s no basis at all.”