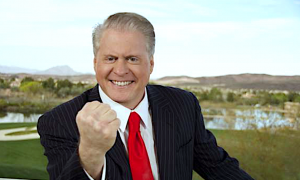 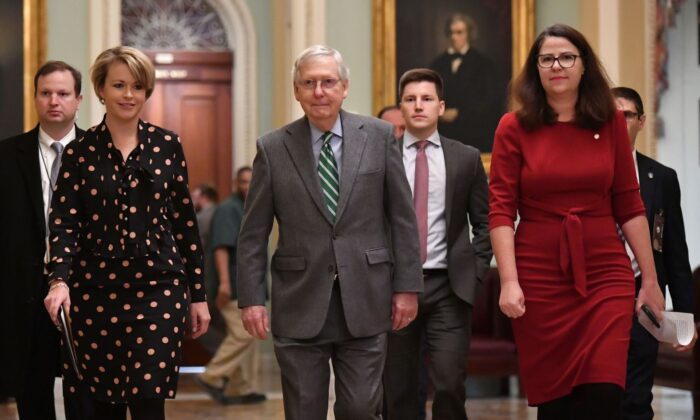 Impeachment Trial of Trump Formally Starts as Senators Are Sworn In

The impeachment trial of President Donald Trump began in the Senate on Jan. 16 with a reading of the House-passed articles of impeachment and a swearing-in of 100 senators in front of Supreme Court Justice John Roberts.

After 2 p.m. Eastern time, Roberts placed his hand on the Bible and was sworn in by Sen. Chuck Grassley (R.-Iowa), the Senate’s president pro tempore. He then called on all 100 senators to stand to be sworn in.

The senators took an oath before the trial. Roberts asked them, “Do you solemnly swear that in all things appertaining to the trial of the impeachment of President Donald John Trump, president of United States, now pending, you will do impartial justice according to the Constitution and laws, so help you God?”

“We do,” the senators replied.

Senators were then called to the Senate clerk’s desk to sign their names in an oath book.

After the swearing-in ceremony, Senate Majority Leader Mitch McConnell (R-Ky.) elaborated on the next steps the upper chamber will take. He gave the House until Jan. 18, and the White House until Jan. 20 to provide trial briefs outlining their arguments. The House will have a rebuttal on the following day, and the Senate trial will resume on Jan. 21.

The House voted to transmit the two articles of impeachment on Jan. 15, and seven House managers named by Speaker Nancy Pelosi (D-Calif.) carried the articles to the upper chamber later that day.

During the swearing-in, Schiff read out the two articles of impeachment on the Senate floor, saying a president can be “removed from office” for committing treason, bribery, or high crimes and misdemeanors. Trump “solicited the government of Ukraine to publicly announce investigations” to bolster his chances at reelection, Schiff alleged, saying that Trump also withheld aid to Kyiv as a condition.

This moment will mark only the third time in U.S. history that a president will face the prospect of being convicted and removed from office by the Senate. But in this case, it is highly unlikely, as removal requires a 67-vote supermajority, meaning that about 20 Republicans would have to break with their party and join the Democratic minority.

After the articles were read aloud by Schiff, White House press secretary Stephanie Grisham wrote on Twitter that Democrats “manufactured” the articles of impeachment, which she described as a “sham.” They are trying to “stop [Trump] from his continued success on behalf” of the United States, she said.

Ahead of the trial, a White House spokesperson told reporters in a phone call that the Trump administration doesn’t believe the Senate trial will last longer than two weeks or will call any witnesses.

“It is extraordinarily unlikely that we would be going beyond two weeks. We think that the case is overwhelming for the president and the Senate is not going to have any need to be taking that amount of time,” the senior official said.

It still isn’t clear if any witnesses will testify. McConnell and Senate Minority Leader Chuck Schumer (D-N.Y.) have grappled over whether the Senate trial should include witnesses or subpoenaed documents.

Some Republicans, however, have said they would like to call up Republican-favored witnesses, including Hunter Biden, son of former Vice President Joe Biden. He had sat on the board of a Ukrainian gas company that was at the center of the impeachment inquiry.