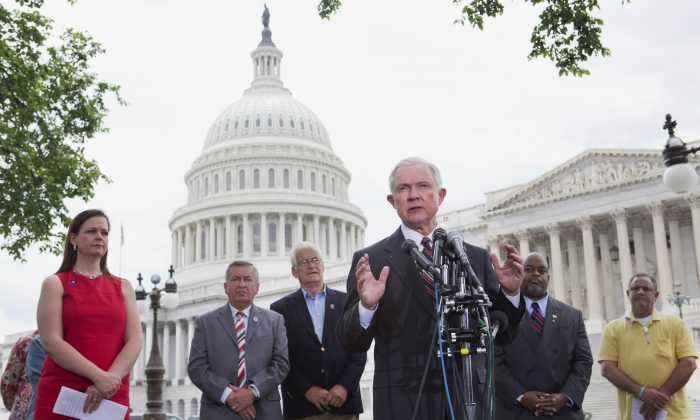 Senators are finalizing a deal that would both add dramatic security improvements to the U.S.-Mexico border and smooth the way for bipartisan Senate passage of far-reaching immigration legislation backed by President Barack Obama.

The deal doubles the number of Border Patrol agents and adds hundreds of miles of fencing along the Southwest border. It has already won support from four previously undecided Republican senators, and on Friday senators were in final negotiations on other elements of the deal that could bring still more GOP support on board.

The new border security amendment is expected to come to a vote early next week, with the overall bill headed for a final vote several days later. The legislation—which would open the door to citizenship for millions—appeared within reach of securing the broad bipartisan majority that its authors say is needed to ensure serious consideration by the GOP-controlled House.

The outcome there remains far from certain, however, because many conservatives are opposed to offering citizenship to people who came to this country illegally.

“We really have tried to secure the border in a way that we hope can get bipartisan support and that Americans want,” Sen. John Hoeven (R-N.D.) an author of the amendment, said in a phone interview Friday. “We’re hopeful to have a good bipartisan majority.”

Hoeven developed the amendment along with Republican Sen. Bob Corker of Tennessee, in consultation with Sen. John McCain (R-Ariz.), Sens. Lindsey Graham (R-S.C.), Chuck Schumer (D-N.Y.), and other members of the so-called Gang of Eight. The group wrote the immigration bill. It would add a 12-year period through which immigrants could become citizens while preventing those in the country illegally from attaining permanent resident status until a series of steps had been taken to secure the border.

These include doubling the Border Patrol by adding 20,000 new agents, as well as 18 new unmanned surveillance drones, 350 miles of new pedestrian fencing to add to 350 miles already in place, and an array of fixed and mobile devices to maintain vigilance, including high-tech tools such as infrared ground sensors and airborne radar.

The new provisions would be put in place over a decade, and Hoeven said the 10-year cost of the security amendment included $25 billion for additional Border Patrol agents, $3 billion for fencing, and $3.2 billion for other measures.

It’s “border security on steroids” said Corker, who along with Hoeven had been uncommitted on the immigration bill.

Schumer said after the bill passed two procedural votes on June 11 that the border is huge, and impossible to patrol with people alone.

“You can’t station enough people on the border, there are no roads on large parts of it, but with the drones, you can see every single person that crosses the border day or night, and you can follow their paths so they can be apprehended,” he said.

White House press secretary Jay Carney said the border deal “would constitute a breakthrough” on immigration. “We’re pleased that Republicans and Democrats continue to work together toward comprehensive immigration reform,” he said.

President Obama praised the proposed bill in a speech earlier this month, where he introduced an outstanding student who came to America illegally as a child. Tolu Olubunmi came to the United States from Nigeria when she was 14, staying here illegally and earning academic honors, most recently graduating with top honors with a degree in chemistry and engineering.

Obama’s Dream Act covers people in situations like Olobunmi’s. The act protects young people who came to America as children and meet certain standards from being deported. The immigration reform would give them a lengthy, years-long way to become citizens without leaving the country and returning.

The path in the bill allows millions of undocumented immigrants to apply for a green card after a 10-year probation period in the country, then apply for citizenship three years later.

Obama described the proposed reform in glowing terms. “It’s fair for middle-class families, by making sure that those who are brought into the system pay their fair share in taxes and for services. And it’s fair for those who try to immigrate legally by stopping those who try to skip the line. It’s the right thing to do … Smarter enforcement. A pathway to earned citizenship. Improvements to the legal system. They’re all commonsense steps. They’ve got bipartisan support.”

The legislation had been expected to be formally unveiled in the Senate late Thursday, but that was delayed as senators and aides negotiated an array of issues, some that will be included in the amendment and some not, as they sought to iron out final obstacles to passage of the overall bill.

The breakthrough came when the nonpartisan Congressional Budget Office released a report June 18 finding that the bill would cut billions of dollars from the deficit, and could reduce illegal immigration by 25 percent. Schumer’s top immigration aide, Leon Fresco, had the idea of devoting some of those billions to a dramatic border buildup.

Graham, who helped run interference between Corker and Hoeven, and Democrats in the group, said that with the budget office finding in hand, he sat down with Schumer and Corker and said, “OK, let’s go big.”