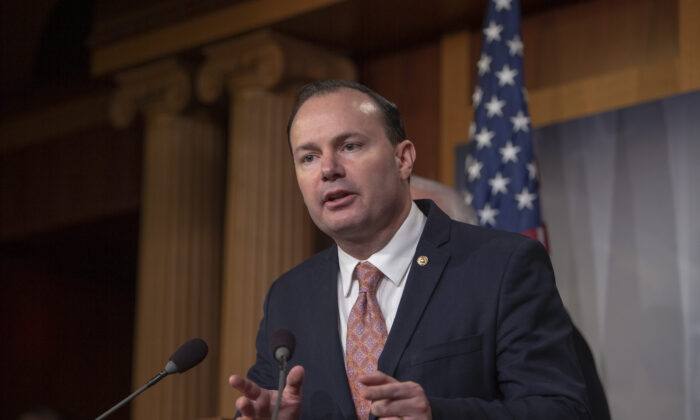 Sen. Mike Lee (R-Utah) and 13 of his Senate Republican colleagues are challenging other GOP lawmakers and Democrats in the upper chamber to adopt a “clean” continuing resolution (CR) with no additional spending or policy changes.

The letter puts the signers on a collision course with Senate Democrats, headed by Senate Majority Leader Chuck Schumer (D-N.Y.), regarding how the chamber deals with the requirement that Congress either adopt—and President Joe Biden sign into law—a completed 2023 budget, or approve a CR that keeps the federal government open after the Sept. 30 end of the 2022 fiscal year.

A CR provides “stopgap” funding to keep affected government agencies operating for a period of time that’s specified in the resolution.

Democrats are expected to push for a short-term CR that would end before the 118th Congress takes office in early January, thus requiring another vote. That additional vote would give the current Democratic congressional leaders an opportunity to fatten federal spending and add policy directives that a new Republican majority would almost certainly oppose in 2023.

Lee and his fellow Senate conservatives are seeking to force the issue among their GOP colleagues, many of whom may prefer the Democrats’ approach. It could also give them a chance to grab another slice of the federal spending pie.

“We must not accept anything short of a ‘clean’ [CR] that contains no additional spending or extraneous policy riders. At a minimum, any agreement on a clean CR must carry over into the beginning of the 118th Congress,” the 14 Republicans say in a Sept. 19 Dear Colleague Letter to the other 36 GOP senators.

“Failure to stand strong against lame-duck spending and caving to the Democrats will likely worsen inflation, prolong the current economic recession, and advance policies contained in the Biden administration’s progressive wish-list. The American people cannot afford another Washington feeding frenzy. We must not let them down,” the letter says.

Republicans on the House side also are calling for a clean CR.

In a Sept. 19 Dear Colleague Letter to their fellow House Republicans, 41 GOPers led by Rep. Chip Roy (R-Texas) said they will oppose anything less than a spending measure that goes through the end of the year.

“As the Sept. 30 federal funding deadline approaches, Republicans must do what is necessary to ensure that not one additional penny will go toward this administration’s radical, inflationary agenda,” the House GOP members wrote.

“Therefore, we, the undersigned, will oppose any continuing resolution that expires prior to the first day of the 118th Congress, or any appropriations package put forward in the remaining months of this Democrat-led Congress.”

Also among the House signers were Rep. Kevin Hern (R-Okla.) and Kat Cammack (R-Fla.), who have indicated their interest in succeeding Banks as head of the RSC.

Among the hottest issues that will shape the outcome of the continuing resolution battle is the Biden administration’s refusal to end its open border policies that have allowed more than 2 million illegal immigrants to enter the country from Mexico.

“As Republican governors continue to engage in political stunts with the lives of asylum-seekers arriving at the border, EFSP funds will ensure that NGOs and communities are able to provide adequate support services such as food, shelter, transportation, and access to basic health care.

“Without additional EFSP funding, NGOs and communities that have been providing critical services for years may be forced to scale back or cease their operations,” the signers said in a Sept. 19 statement accompanying the release of their letter to Appropriations Chair Patrick Leahy (D-Vt.) and ranking member Richard Shelby (R-Ala).