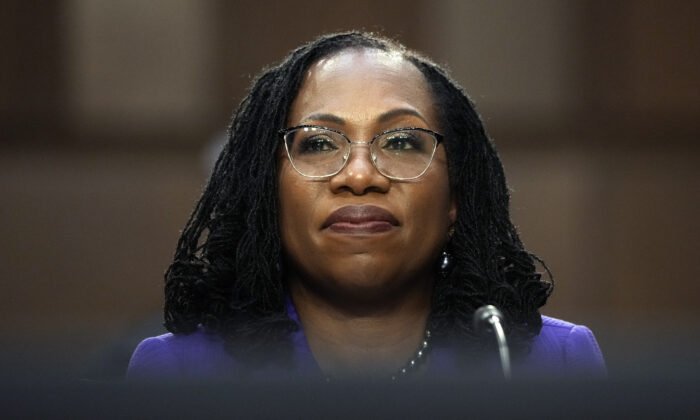 As the week progresses, lawmakers on both sides of the aisle will delve deeper into Jackson’s track record and judicial ideology, but much of Monday’s session was consumed by introductory remarks and broad ideological statements, allowing members of both parties to speak before questioning begins.

During their opening statements, several Democrats referenced Jackson’s potential to become the first black woman confirmed to the court.

Senate Judiciary Chairman Dick Durbin (D-Ill.) said “Not a single justice has been a black woman. You, Judge Jackson, can be the first.

“It’s not easy being the first,” Durbin continued. “Often you have to be the best. In some ways, the bravest. Many are not prepared to face that kind of heat, that kind of scrutiny, that ordeal and the glare of the national spotlight.”

If Jackson is confirmed, Durbin added, “We can be confident that the court, its role, and its decisions will be more understandable to the American public.”

“The appointment of the first black woman to the Supreme Court—let’s be honest—should have happened years ago,” said Sen. Dick Blumenthal (D-Conn.). Her nomination, Blumenthal added, “is a giant leap into the present for our country.”

“Your service will make the court look more like America,” Blumenthal added.

The nomination of a black woman is “far past time,” Sen. Amy Klobuchar (D-Minn.) agreed.

Durbin also said that Republican attacks on Jackson for being “soft on crime” are “not fair,” and Durbin claimed that Jackson had decided cases both for prosecutors and against them based on the case. These attacks on Jackson, Durbin said, are “demagoguery.”

Later, Senate President Pro Tempore Patrick Leahy (D-Vt.) made much the same point, saying that Jackson was not a “judicial activist.”

Responding to these charges that Republicans were being unfair toward Jackson, Judiciary Ranking Member Chuck Grassley (R-Iowa) said, “As for her district court record, there have been some accusations that we cherry-picked some of Judge Jackson’s criminal cases. Well, don’t worry. We’re going to talk about other cases as well.”

Referencing Jackson’s track record, Sen. John Cornyn (R-Texas) said that while he understands the “zealous advocacy” that underlies the U.S. legal system, he has been concerned by some statements that Jackson has made advocating for “terrorists and other dangerous criminals.”

Lawmakers on both sides of the aisle discussed the judicial ideology that they thought should underlie Supreme Court decisions, espousing substantially different views of what the Constitution is and should be.

In the GOP opening remarks, Grassley criticized the notion of a “living constitution,” a theory that promotes a more expansive reading of the federal constitution rather than a narrow, textually-strict one.

Sen. Ted Cruz (R-Texas) said that Democrats have undertaken an effort to use the Supreme Court to pass laws that they couldn’t push through the legislature.

“It’s much easier to convince five lawyers in black robes” that a policy is correct than it is to convince Congress, Cruz said, warning that the legislature should be invested with far more power than the judiciary.

During her own remarks, Klobuchar also discussed the issue, but offered a far more expansive vision of how the Constitution should be treated.

In past confirmation battles, Klobuchar has advocated for a far less strict view of how the Constitution should inform the judiciary. On Monday, Klobuchar expressed a common position among Democrats, calling for the Supreme Court to update the Constitution to suit modern conditions.

“This is a time for us to consider the Supreme Court’s place in our democracy and how it impacts people,” said Klobuchar.

Klobuchar approvingly cited a past statement by Justice Breyer in which he said the court “can and should interpret the Constitution in a way that works for the people of today.”

Republicans have also remained chafed by the treatment of Justice Brett Kavanaugh, whose confirmation battle became one of the most personal and politicized in U.S. history after Kavanaugh was accused of sexual misconduct at a college party in the 1980s.

During Kavanaugh’s confirmation, Graham said, Republicans “couldn’t go back to our offices during Kavanaugh without getting spit on.”

Cruz added in his own remarks that the battle over Kavanaugh’s confirmation was “one of the lowest moments in the history of this committee.”

Other Republicans cited broader concerns over the politicization of the Supreme Court.

Cornyn said in his opening remarks that though the Founders intended for the Supreme Court to be independent and above political squabbles, the judiciary has become increasingly politicized.

He cited Biden’s refusal on the campaign trail to disavow court-packing, the threats made against Supreme Court and Senate Judiciary members by left-wing activists, and the presence of “dark money” groups which have further pushed the politicization of the Supreme Court.

Much of Monday’s hearings will be consumed by introductory remarks. As the hearings continue over the next several days, lawmakers on both sides of the aisle will delve far deeper into Jackson’s track record and judicial ideology.