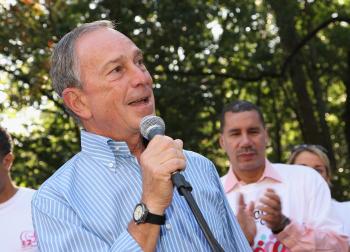 NEW YORK—Although Mayor Michael R. Bloomberg spoke out earlier this year in favor of federal health care reform, he and Gov. David Paterson are now saying that the current bill being considered by the U.S. Senate is unfair to New Yorkers.

“New Yorkers will more than pay their share for increasing health coverage around the country,” reads the letter. “All of the major financing options—from Medicare cuts, to Medicare tax increases, to excise taxes on higher cost health plans—can be expected to extract more revenue/savings from New Yorkers than the per capita national average. And, yet New York will receive far less than the national average in federal relief.”

The two say they are troubled by the fact that the bill would deny New York federal funds other states are getting.
The bill “penalizes New York for its leadership in expanding Medicaid coverage to low-income adults and threatens to impose disproportionate new burdens on New Yorkers,” reads the letter.

New York covers parents up to 150 percent of the federal poverty level, something only a handful of other states provide.
“In exchange for New York’s early commitment to coverage, [the bill] denies New York federal funds extended to nearly every other state in the nation,” the letter reads.

The bill cuts off funds for any state generous enough to already be covering parents over 133 percent of the federal poverty line, including New York.

Also, Bloomberg and Paterson point out that the bill would make cuts of up to more than $1 billion per year in Medicaid Disproportionate Share Hospital (DSH) payments.

“The DSH cuts contemplated … would be particularly devastating to New York City’s Health and Hospitals Corporation, which is already facing major fiscal challenges. The DSH cuts alone would require very significant service cuts, potentially including closure of all of HHC’s community clinics and cancellation of its home care service.”

The letter appears to favor health care legislation passed in the U.S. House, saying that the Senate bill would cut more than twice as much Medicaid DSH as the House health reform bill would.