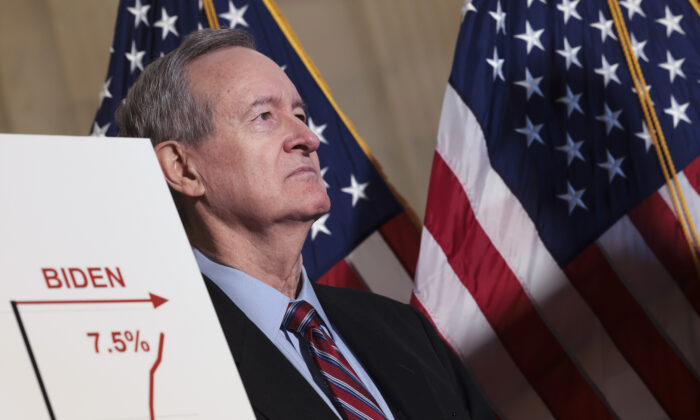 Sen. Rob Portman (R-Ohio) predicted on July 13 that inflation will soon hit double-digit figures if President Joe Biden and congressional Democrats move forward with their plans to boost taxes on most Americans.

“We just got the numbers this morning for Ohio—$8,300 bucks a year in additional spending on energy, on food, on utility bills generally, and on clothing.” Portman’s $8,300 figure is based on data from January through June and projected to the end of the year.

“This is something that unfortunately is going to get worse, not better, unless we change policies,” he said. Extrapolating the current inflation figure to the rest of the year produces an annual rate of 16.1 percent, he said.

Portman isn’t alone in fearing double-digit inflation later in the year, however, as in a related development on July 13, an economic analyst at the conservative Heritage Foundation think tank made a similar prediction.

“An inflation rate at 9.1 percent is devastating enough, but the official rate doesn’t even fully capture just how bad the situation is. Lower-income families and working Americans are being especially hard-hit by skyrocketing prices on items like food, gas, and housing,” economic policy studies research fellow Joel Griffith said in a statement.

“This administration is tone-deaf to the economic realities and the problems that they have created. Biden’s war on affordable energy production is the main culprit for both the high gas prices and skyrocketing food prices,” Griffith said.

“Things are only going to get worse, one way or another, as Biden’s economic policies are a double-edged sword. This is quite possibly the last month of lingering economic factors keeping inflation in the 8 percent range, which means the official (consumer price index) CPI number could be in the 10 percent range by the fall.”

Portman’s comments came during a July 13 news conference in which Sen. Mike Crapo (R-Idaho), the top GOP member of the Senate Finance Committee, was joined by half a dozen colleagues from that panel in denouncing the Biden administration’s economic policies, which they contend are causing the spiraling inflation rate that hit 9.1 percent in June, according to the government.

“We all saw the news this morning that we’ve hit yet another record, 9.1 percent inflation,” Crapo told reporters in the Senate Press Gallery.

“Today’s new data shows the consumer price index remaining at a painful 40-year high, jumping to 9.1 percent for June from 8.6 percent in May, which was a record in May. When President Biden took office, the inflation rate was 1.7 percent and for the four years previous to that it was in that zone,” Crapo said.

“Look where it’s gone now and the president continues to try to give reasons for this, using Russia, but the Russian invasion [of Ukraine] took place at around 7 or 8 percent inflation and it’s been going up since.”

“Economic conditions for Americans generally have deteriorated significantly. Inflation-adjusted wages for workers are falling, consumer and business confidence has cratered, nest eggs for retirees are eroding from the double whammy of inflation and lower account values, and the odds of recession have been rising, with stagflation an imminent threat,” he said.

“Nonetheless, in the face of all this, the Democrats want to raise taxes, including on the middle class and on taxpayers earning far less than $400,000. The Biden administration proposed $2.5 trillion in tax hikes in its Green Book.

“Last year’s House-passed Build Back Better bill was more than $1.5 trillion of new taxes. Now, my Senate Democratic colleagues are talking about a so-called slimmed-down package with tax hikes in the realm of $1 trillion to $1.5 trillion. There is nothing slim about these tax hikes,” he said.

More tax increases will further depress the supply side of the economy and produce more inflation, not less, and depress investment and productivity growth throughout the economy. Consumers are having to pay an estimated $5,200 or more for basic necessities like food, rent, and energy, Crapo claimed.

Crapo said one of the tax increases in the House-passed Build Back Better bill that’s now being considered in the Senate would be especially harmful to small businesses, which account for most of the new jobs in a normal economy.

“The expanded Net Investment Income Tax (NIIT), the tax on flow-through businesses, which are businesses whose owners income flows through to their personal tax forms,” Crapo noted.

“Small business groups estimate that millions of small and family-owned businesses would be at risk of having their tax rates increased under this policy, which will negatively impact their growth,” he said. He said the revised NIIT is projected to cost small businesses more than $252 billion in new levies.

Joining Crapo, Sen. Chuck Grassley (R-Iowa) said, “The biggest concern that I am hearing is the increased costs of energy, groceries, and—particularly from farmers—how the energy programs of the Biden administration are raising farming costs.”

Grassley said his constituents in largely rural Iowa are now paying more than $600 every month for basic necessities than they were prior to the Biden administration.

Sen. John Cornyn (R-Texas) said: “You would think the Biden administration would understand the basic laws of supply and demand. The one reason prices are high is that demand is high. But when demand is high, if you want to lower prices, you increase the supply.

“Unfortunately, because of the ideologically driven energy agenda by this White House, rather than have domestic producers in places like Texas and elsewhere produce more oil and gas here in America, President Biden is doing, really, the unthinkable—he’s going to talk to [Saudi Arabian leader] Mohammed Bin Salman about Saudi Arabia increasing its energy production.”

“Obviously, this is upside down,” Cornyn added.

Sen. James Lankford (R-Okla.) told reporters that he was rummaging through boxes of memorabilia of his mother at his home recently and found a newspaper from the 1970s with a story about President Jimmy Carter meeting with Saudi Arabia’s leaders to appeal to them to increase oil production.

“As I read that story, all I could think was history is repeating itself,” Lankford said.

Sen. Todd Young (R-Ind.) said the $5,200 increase in costs due to inflation “is a lot of money for the average American household. I know back home in Indiana, $5,200 can make or break an administration, it can make or break a presidency.”