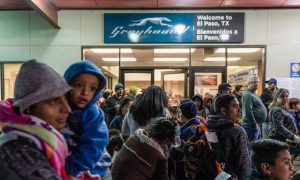 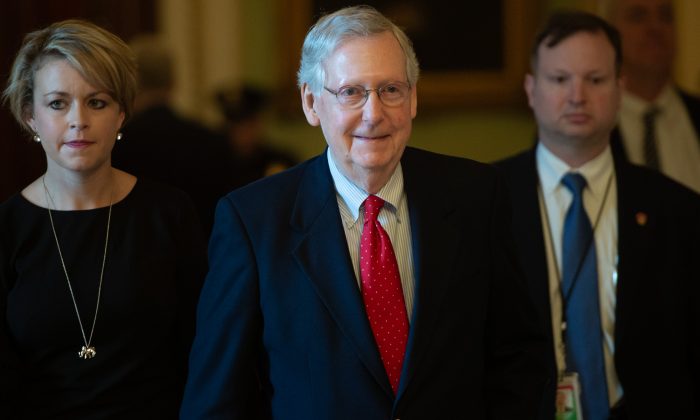 With the Senate in session on Dec. 27, the chamber has so far failed to reach an agreement on funding the border wall, thus extending the partial government shutdown.

About quarter of the federal government ran out of money on Dec. 22, as Senate Democrats and President Donald Trump remained at odds over $5 billion in border security funding the president has requested for constructing parts of the wall along the southern border—his signature campaign promise.

The shutdown affects about 15 percent of the federal workforce. More than 420,000 government employees deemed essential were expected to work without pay and over 380,000 were to be furloughed, according to projections by the staff of Sen. Patrick Leahy (D-Vt.), vice chair of the Appropriations Committee. The workers are to receive their last paychecks on Dec. 28. The next paycheck, scheduled for Jan. 11, will be affected, said Mick Mulvaney, director of the Office of Management and Budget and acting White House chief of staff.

Trump has offered to accept less money and to avoid the term “wall”—a political repellent for the Democrats—calling it “steel slats” or a fence instead.

But Democrats have shown no sign of pursuing a quick agreement and appear to be waiting for the new year when they’ll hold a House majority in the new Congress.

“Different people from the same White House are saying different things about what the President would accept or not accept to end his #TrumpShutdown, making it impossible to know where they stand at any given moment,” Senate Minority Leader Chuck Schumer (D-N.Y.) said in a Dec. 24 series of tweets.

Over the weekend, Mulvaney said the White House had made a counter-offer to Democrats on border security. Media reports said Vice President Mike Pence had proposed $2.1 billion in funding.

“The administration understands this crisis and made a reasonable, common-sense solution to Democrats five days ago—we’ve not received a single response,” White House press secretary Sarah Huckabee Sanders said in a Dec. 27 statement. “The president and his team stayed in Washington over Christmas hoping to negotiate a deal that would stop the dangerous crisis on the border, protect American communities, and re-open the government. The Democrats decided to go home.”

Under pressure from Trump, Republicans passed the wall funding in the House, but they only have a tight 51–49 majority in the Senate, where they need 60 votes to overcome a filibuster.

The Senate reconvened at 4 p.m. on Dec. 27, expecting to continue negotiations on the spending bill. But no action was scheduled on the floor.

Senate Leader Mitch McConnell (R-Ky.) said on Dec. 22 he reached an agreement with Schumer to pause all action on the funding bill until the Democrats strike a deal with Trump.

“No procedural votes. No test votes,” he said in a statement. “Just a meaningful vote on a bipartisan agreement when one is reached. And it’s my hope that it’s reached sooner rather than later.”

If the Senate fails to act by the year’s end, the House will have to pass new legislation. Pelosi, expected to become House Speaker, has already said she plans to quickly extend the funding, but there’s no indication she would be willing to oblige Trump on the wall funding.

Senate GOP will expand its majority in January, but only to 53 seats, still needing seven Democrats to pass budget bills. Senate Democrats previously only agreed to some $1.3 billion for border security, which doesn’t include new wall construction. There may be a chance, however, that the funds could be used to expand the steel slat fence, which already exists in the San Diego area. Trump suggested he’d settle for that.

Democrats have called the wall project ineffective and wasteful, but in 2013 they were willing to support 700 miles of border fencing as part of a bill that also included a path to citizenship for illegal immigrants.

Trump asked for 500 to 550 miles of “a wall or fence, whatever they’d like to call it” on Dec. 25, saying other parts of the border already have terrain features sufficiently difficult to cross.

Border Patrol officials have repeatedly called for a wall in certain areas.

The wall is not a panacea as human and drug traffickers incessantly come up with ways to overcome it. But it does slow them down, said Sheriff Leon Wilmot of Arizona’s Yuma County. Ancillary crimes in the county dropped by 91 percent following the border fence expansion and other security measures provided by the Secure Fence Act of 2006. The bill passed with strong bipartisan majorities in both chambers. At that time, Schumer gave his “yay” too.