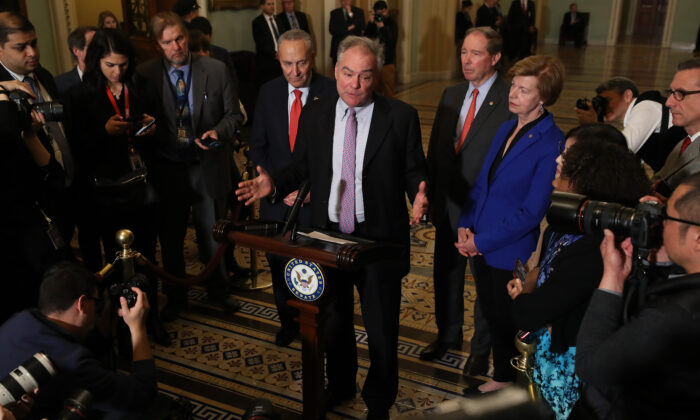 “We now have the 51 votes that we need,” Sen. Tim Kaine (D-Va.) said at a press conference in Washington on Tuesday.

Kaine said that he’s been speaking to Republican colleagues who were disenfranchised with the classified briefing about the airstrike that took out Iranian General Qassem Soleimani.

“And there are a number of other Republicans who are looking at it as well,” he said.

The version that’s attracted the support is a revised version that includes language added by GOP members.

“We now have a majority of colleagues, Democratic and Republican, who will stand strong for the principle that we shouldn’t be at war without a vote of Congress,” Kaine said. “I’m going to keep working to get more until we have this vote soon.”

“The framers gave to Congress the sole power to declare war because they knew that it would be a safeguard against a rush, we don’t want a rush, this should be the hardest decision we make. And because we’re going to be ordering young men and women to risk their lives, we shouldn’t do it unless we have the guts to have the debate and have the vote and say the war is in the national interest,” Kaine also said.

Senate Minority Leader Chuck Schumer (D-N.Y.) said that “so many Americans are worried” about what Trump might do in Iran.

“It’s clear that the mother and fathers of America don’t want another endless war in the Middle East, and yet the president could force us into one or, more likely, bumble into one,” he said.

The resolution “would prevent further escalation of hostilities with Iran,” Schumer said.

The timing of the vote on the revised resolution hasn’t been set as of yet.

The press conference came shortly after Young said he supports a revised version of the resolution from Kaine.

“I will be supporting, shall we call it, Kaine 2.0., the newer Kaine language, should I have an opportunity to vote on it,” Young told reporters in Washington.

“While I appreciate Senator Kaine’s willingness to revise this bill, I will be opposing the motion to discharge and hope that we can continue working on this issue in a less politicized manner,” he said. Young has been working with Kaine but “due to Senate parliamentarian procedures, those revisions will not be incorporated until after a partisan vote to discharge occurs.”

If Kaine’s original resolution is discharged from the Foreign Relations Committee, he can amend it before it’s voted on by the full Senate.

Lee told The Hill that the resolution is a “completely noncontroversial measure” that emphasizes the Constitution giving Congress the sole power to declare war, adding that the measure states that “additional hostilities against Iran need to be authorized by Congress.”

“That is a perfectly unremarkable statement,” Lee added. “The fact that this would be objectionable to anyone in either political party is really saying something.”

Other Republicans have come out against the resolution, including Senate Majority Leader Mitch McConnell (R-Ky.).

“I don’t believe the blunt instrument of the war powers resolution is an acceptable substitute for the studied oversight the Senate can exercise through hearings, resolutions, and more tailored legislation,” McConnell said on the Senate floor on Monday.

“So I will strongly oppose the resolution, and I would urge all our colleagues to consider what message the Senate should send to Iran and the world at the very moment that America’s actions are challenging the calculus in Tehran for the better. We appear to have restored a measure of deterrence in the Middle East, so let’s not screw it up.”

The House passed a concurrent resolution last week but that one is non-binding, meaning it doesn’t have the force of law and doesn’t require Trump’s signature. The Senate resolution would be binding but could be vetoed by Trump.

If the president does veto, then the Senate would need 67 votes to override his veto.