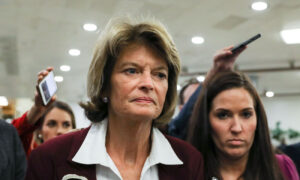 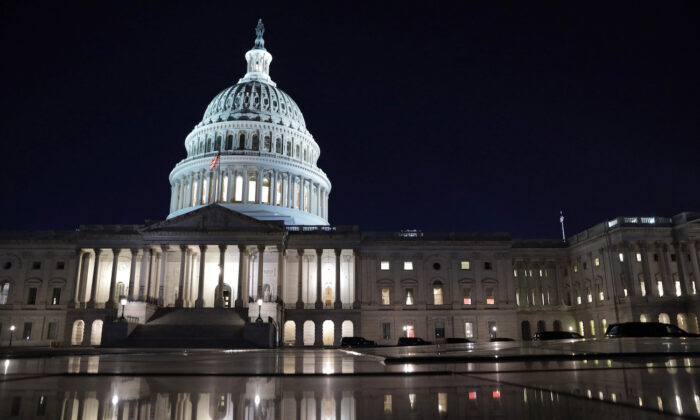 The U.S. Capitol is seen in the evening hours in Washington on March 5, 2021. (Alex Wong/Getty Images)
Democrats

Senate Democrats late Friday reached a compromise agreement among themselves on tax breaks and unemployment benefits in the $1.9 trillion bill, enabling them to move forward with the proposal.

Sen. Joe Manchin (D-W.Va.) announced in a statement: “We have reached a compromise that enables the economy to rebound quickly while also protecting those receiving unemployment benefits from being hit with unexpected tax bill next year.”

He added, “Those making less than $150,000 and receiving unemployment will be eligible for a $10,200 tax break. Unemployment benefits will be extended through the end of August.”

The deal comes after the Senate paused for hours as Democrats tried to get Manchin’s support.

“It extends supplemental unemployment benefit into September, and helps the vast majority of unemployment insurance recipients avoid unanticipated tax bills,” she announced. “Most importantly, this agreement allows us to move forward on the urgently needed American Rescue Plan, with $1400 relief checks, funding we need to finish the vaccine rollout, open our schools, help those suffering from the pandemic, and more.”

The bill now faces a potentially long process in which Republicans were expected to offer scores of amendments. The proceeding was expected to last late into the evening, with a final vote possibly not coming until Saturday.

Democrats currently hold the smallest possible majority in the Senate, with 48 Democrats and two independent senators who caucus with them.

So far, Senate Democrats have taken out the minimum wage increase and modified $350 billion in state and local aid to steer more money to smaller states.

If the Senate passes the bill, the House would have to sign off on those changes before Biden could sign it into law.

Democrats are seeking for the bill to be signed by Biden before March 14, when enhanced jobless benefits and some other aid are due to expire.