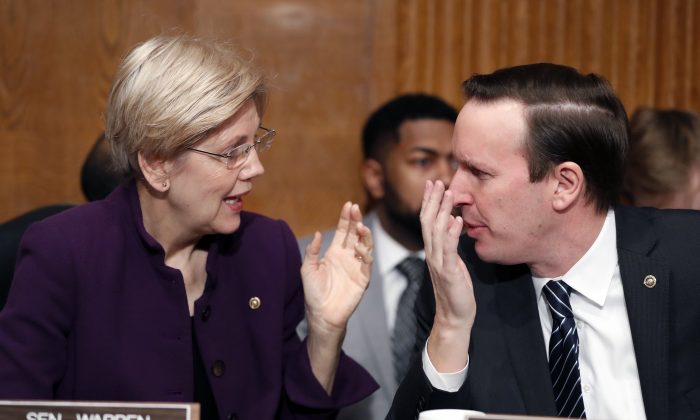 Senate Democrats Call for Ramping Up Testing on Capitol Hill

More than 20 Democratic senators sent a letter on Monday to Senate Majority Leader Mitch McConnell (R-Ky.) and House Speaker Nancy Pelosi (D-Calif.) saying that the recent uptick in COVID-19 cases on Capitol Hill requires increased testing for all those working there.

Led by Sen. Chris Murphy (D-Conn.) and signed by 24 senators, the letter read, “With 123 positive cases amongst Legislative Branch employees or contractors, it is critical that everyone has access to and the assurance of strong testing protocols to prevent the unidentified spread that has occurred in several instances over the past few months. Failing to provide this testing puts everybody within the Capitol complex at risk.”

Senators said that while testing “is now being offered to some Senate staff for the first time,” they argued that “these actions do not go far enough.”

The senators urged McConnell and Pelosi to provide expanded testing for all those who work on the Hill.

“Throughout the pandemic, the staff who keep operations going in the Capitol have faced numerous challenges and are showing up to work even as many congressional offices have their staff work remotely,” they wrote. “They work long, often irregular hours and are committed to ensuring that the Capitol and its facilities and patrons are treated with the utmost respect and dignity.”

The vision in the letter is to increase testing capacity to include Capitol Police, office staff, restaurant workers, cleaning staff, and lawmakers. The senators said they want to show their thanks and do their part “to keep them [staff] safe and healthy each and every day by adopting a widespread testing plan and other public health practices.”

Earlier this month, Pelosi said that testing is available for those who need and request it but the universal testing on Capitol Hill is not.

In May, McConnell and Pelosi both declined an offer from the White House for rapid testing for lawmakers, saying they wanted to keep resources focused more on the front lines.

Meanwhile, Pelosi allowed the House to adopt proxy voting, which gave members the option to vote and participate in hearings virtually for those members that did not want to risk coming to the complex during the pandemic.

Monday’s letter from Senate Democrats echoes recent calls by Senate Minority leader Chuck Schumer (D-N.Y.) who issued a resolution to have masks be mandatory on its side of the Capitol and in office buildings.

The Democrats’ demands for improved health protocols come after three Republican senators tested positive for the CCP virus, and another three were self-quarantining as a precaution do to contact with their colleagues.

“The U.S. Senate has become a COVID-19 hot spot and we need to take immediate action, guided by the best science, to put in place additional protections to safeguard the health of the Senate complex workers, Senate staff, and senators,” Schumer said in a statement.

To date, seven senators and 13 representatives have tested positive for the CCP virus this year, and dozens more have had to quarantine. More than 120 staff working on the Hill have also tested positive.