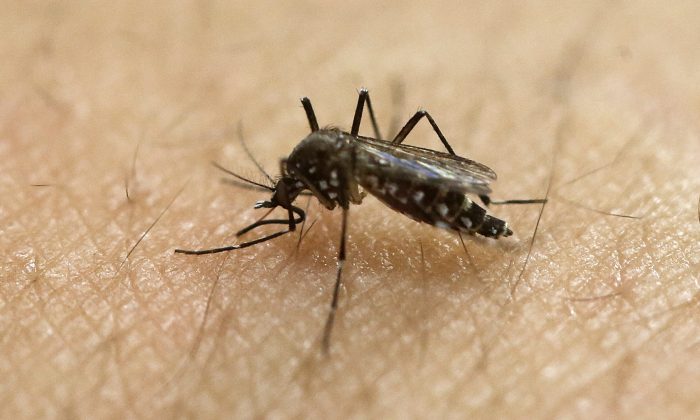 A female Aedes aegypti mosquito acquires a blood meal on the arm of a researcher at the Biomedical Sciences Institute in the Sao Paulo's University in Sao Paulo, Brazil on Jan. 18. (AP/Andre Penner)
US

WASHINGTON—Senate Democrats on Tuesday blocked a Republican proposal to provide $1.1 billion to fight the Zika virus, faulting the GOP for packing the measure with restrictions on Planned Parenthood money and changes to policies on pesticide spraying.

The nearly party–line 52–48 vote Tuesday left the Senate short of the 60 votes required to advance the measure. What happens next is unclear, though neither side is looking forward to leaving Washington next month for a seven–week vacation without having acted to address the health threat.

Zika is spread mainly by a tropical mosquito and is causing an epidemic in Latin America and the Caribbean. The virus can cause horrible birth defects and is likely to spread further this summer. So far, there’s been no transmission by mosquitoes in the continental U.S.

“There’s not going to be another opportunity to deal with this in the near future,” promised No. 2 Senate Republican John Cornyn of Texas.

The White House has threatened to veto the legislation.

The House–Senate measure matches the $1.1 billion measure that passed the Senate last month on a sweeping vote, but Democrats oppose a handful of provisions designed to mollify GOP conservatives in the House and the attachment of companion spending cuts to defray its cost.

Democrats particularly oppose a provision that restricts the use of $95 million worth of federal grants to provide services such as birth control to women in Puerto Rico threatened by the virus. Democrats charged that the restrictions were targeted at Planned Parenthood, a group loathed by many anti–abortion Republicans.

In addition to the limits on Planned Parenthood, the bill would temporarily lift permitting requirements on pesticide spraying.

Even as Democrats pressed for compromise, they crowed that Republicans controlling Congress would soon reconsider.

“They come back with their tail between their legs saying ‘Let’s pass something,'” said Sen. Charles Schumer, D–N.Y.

Republicans controlling Congress have been slow to act on Obama’s request, instead forcing the administration to redirect more than $500 million in unspent Ebola–fighting funds to combat Zika.

In a letter Tuesday morning, top Senate Democrats reiterated their opposition to the partisan provisions, but offered relatively mild objections to the inclusion of spending cuts to finance the Zika package.

“We stand ready to work cooperatively with you,” the Democrats’ letter said.

The measure is an agreement between House and Senate Republicans who say they drafted it in hopes of finding a compromise that could somehow satisfy both tea party Republicans and Obama’s Democratic allies in the Senate. It did nothing of the sort. The House passed the measure along party lines last week.

Minority Leader Harry Reid, D–Nev., reacted with outrage that GOP negotiators dropped a House provision to ban the display of the Confederate flag at federal veterans’ cemeteries a day or so each year. Democrats did not seek to address the issue during Senate debate last month.

Each side already has begun the blame game. Cornyn appeared on the Senate floor with a poster of a baby born with microcephaly, a severe deformity in which children are born with poorly developed brains and small skulls.

“I wonder what the senators who voted against this bipartisan Zika funding bill would tell the mother of this child,” Cornyn said.

“What a cynical and hypocritical thing to do,” Schumer said. “All Democrats have ever asked for on Zika was to give the (Centers for Disease Control) and the other agencies to protect the American people, pregnant mothers, and their babies from this dangerous virus.”