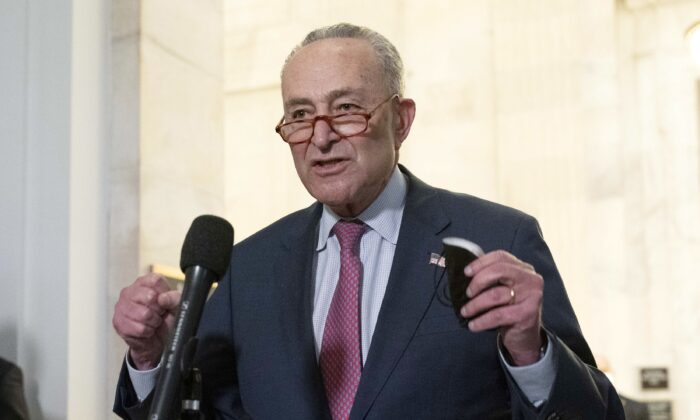 Senate Democrats on Thursday blocked a bill that would have imposed sanctions on entities involved with the planning, construction, or operation of Russia’s Nord Stream 2 pipeline.

The bill was introduced by Sen. Ted Cruz (R-Texas) and garnered “yes” votes from Cruz, 48 other Republicans, and six Democrats.

But 43 Democrats and Sen. Rand Paul (R-Ky.) voted against the legislation, leaving it short of the 60-vote threshold.

Sen. Brian Schatz (D-Hawaii) missed the vote due to being in quarantine after testing positive for COVID-19.

While the Trump administration imposed sanctions on entities linked to the pipeline, the Biden administration lifted them after President Joe Biden took office, claiming it was too late in the construction timeline to make a difference.

The massive pipeline stretches from Russia to Germany and the United States and its allies oppose it because of the leverage it gives Russia over a number of countries in the region.

Cruz was able to get the bill voted on in an agreement with Senate Majority Leader Chuck Schumer (D-N.Y.) after the Republican blocked Biden’s nominees to the State Department.

The vote, though, wasn’t successful.

The White House had lobbied against the bill.

“The Administration does not believe this bill is a genuine effort to counter Russian aggression or protect Ukraine,” the White House said in a statement before the vote. “In fact, if passed, the legislation would only serve to undermine unity amongst our European allies at a crucial moment when we need to present a unified front in response to Russian threats against Ukraine.”

Cruz portrayed the bipartisan support of the bill positively while criticizing Biden’s administration for its position.

“Despite furious White House lobbying, a large bipartisan majority of senators (55-44) once again voted for immediate sanctions on Putin’s pipeline. President Biden should listen to the Senate and to the people and government of Ukraine, and reverse his catastrophic decision to grant Russia waivers from congressionally mandated sanctions. Only immediately imposing sanctions can change Putin’s calculation, stop a Ukrainian invasion, and lift the existential threat posed by Nord Stream 2,” he said in a statement after the vote.

Sen. Bob Menendez, chairman of the Senate Foreign Relations Committee, this week introduced a different bill that has support from the White House.

The legislation, which has 38 Democrat co-sponsors, would impose sanctions on Russia and greenlight military support for Ukraine if Russia invades its neighbor.

“Ultimately the most effective sanction on Russia is a strong and unified Ukraine, and I look forward to working with my Democratic and Republican colleagues so that we can provide the people of Ukraine the type of support they need to confront the bully in Moscow,” Menendez said in a statement.