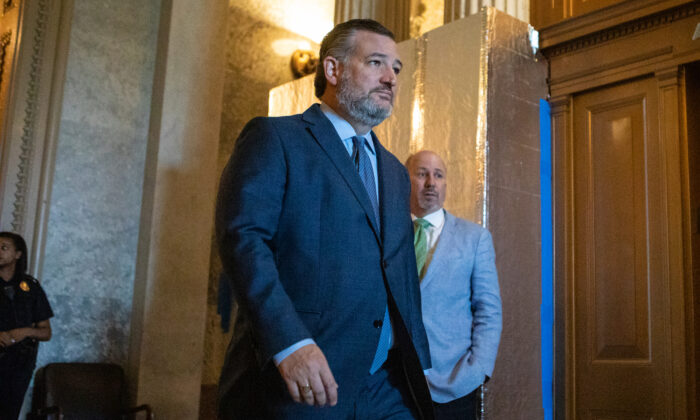 A total of 46 Senate Democrats recently rejected a Republican legislative amendment to block the Biden administration from selling oil from the U.S. strategic reserve to the Chinese regime.

Sen. Ted Cruz (R-Texas) offered the amendment during a “vote-a-rama” process, which lasted nearly 16 hours from the evening of Aug. 6 until the afternoon of Aug. 7, when senators voted on many amendments and motions for a Democratic-led piece of legislation known as the “Inflation Reduction Act of 2022.”

The legislation, a mammoth spending measure totaling $740 billion on climate and energy, health care, and taxes, was approved on Aug. 7 by a party-line vote of 51–50, with Vice President Kamala Harris casting the tie-breaking vote. The House could give the legislation final approval on Aug. 12, when lawmakers reconvene briefly from summer recess.

Before the passage of the legislation, Cruz urged his Democratic colleagues to support his amendment, reminding them that the Biden administration has sold millions of barrels of oil from the Strategic Petroleum Reserve (SPR) to China.

“That oil was paid for by U.S. taxpayers,” Cruz said on the Senate floor. “My bill would block the president from selling our oil to the Chinese communists.

“I would note also that it was sold to a Chinese company owned by the communist government, in which a significant stake was owned by a private equity firm, owned in significant part by the president’s own son, Hunter Biden.

“If the Democrats don’t want to see millions of barrels of U.S. oil sold to the Chinese communists, they should support my amendment.”

The U.S. Department of Energy (DOE) sold nearly 6 million barrels of oil from the SPR from September 2021 to July to Unipec America, the U.S. trading arm of Chinese state-owned oil and gas company Sinopec, according to DOE documents reviewed by The Epoch Times.

For each sale from the SPR, the DOE holds a competitive auction and awards contracts to the highest bidder.

Cruz’s amendment would have added a new condition in the bidding process. According to the language (pdf) of the amendment, an entity or individual who intends to sell the oil to China wouldn’t be considered to have placed a “valid” bid unless the offer is “10 times higher than the next highest bid.”

The amendment was rejected on Aug. 7 after a 54–46 vote that fell short of a 60-vote majority needed to pass. Four Democrats joined all 50 Republicans in voting for the proposal.

After Cruz’s amendment was rejected, Rep. Jeff Duncan (R-S.C.) took to Twitter to write that House Democrats had blocked a similar amendment that he co-sponsored with Rep. Cathy McMorris Rodgers (R-Wash.), the ranking Republican member of the House Energy and Commerce Committee.

According to their proposal (pdf), petroleum would be banned from export to China and to any entity that doesn’t certify that it is “not under the ownership, control, or influence of the Chinese Communist Party.”

The House amendment was rejected after 219 Democrats unanimously voted against it in July, while 206 Republicans voted in favor of it.

Cruz is also leading another effort to ban U.S. oil sales to China. On July 13, he led a group of Republican colleagues in introducing legislation called the No Emergency Crude Oil for Foreign Adversaries Act.

If enacted, the measure (S.4515) would block future SPR auctions from selling oil to China, Iran, North Korea, and Russia, according to a statement.

“President [Joe] Biden crushed American energy production and then sold our strategic oil reserves to China, all while claiming to care about the high prices Americans were paying at the pump,” said Sen. Josh Hawley (R-Mo.), one of the co-sponsors of the pending legislation. “This should never have been allowed to happen. Congress must pass legislation to ensure it doesn’t happen again.”

“China is our greatest threat. We should be holding the Chinese Communist Party accountable for their actions, not assisting them in their efforts to stockpile oil as another means to challenge the United States and our allies.”