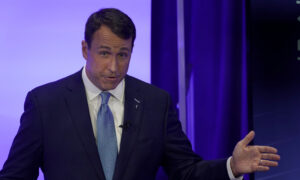 The Democrat’s nominee for a U.S. Senate seat representing North Carolina refused to say on Friday whether he’s had an affair with more than one woman.

Cal Cunningham, 47, had an affair with Arlene Todd Guzman, a media director for a marketing company called Potnt, both parties have confirmed. Cunningham is married to another woman. They have two children.

Asked during his first press conference since the revelations surfaced, Cunningham four times on Friday refused to answer questions about the affair, including several pointed inquiries on whether there were other women.

“I have taken responsibility for the hurt that I’ve caused in my personal life. I’ve apologized for it,” Cunningham responded to one query. “And I know that this campaign, our campaign, is about things that are much bigger and important than just me.”

“North Carolinians are looking for somebody who’s going to take on the monumental challenges in front of us,” he added later.

“I’m not hearing you say that there’s not other women,” one said.

Cunningham also declined to say what his campaign’s internal polling was showing about his admission of an affair.

According to one poll, 37 percent of voters said the information made them less likely to vote for Cunningham. Another 58 percent said it doesn’t make a difference.

Cunningham, a lieutenant colonel in the U.S. Army Reserve, is under investigation by the Army, and Tillis has repeatedly drawn attention to the affair, urging his rival to shed more light on what happened.

Guzman told The Associated Press that she met with Cunningham in Los Angeles in March and in North Carolina in July. She said they had an affair.

Cunningham deflected questions about the misconduct and frequently pivoted to attacks on Tillis during the virtual press conference.

Tillis took to Twitter following the press conference and shared an article about Cunningham refusing to answer questions about whether he had more affairs.