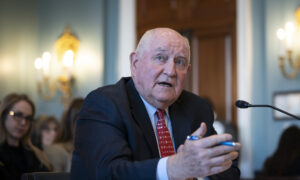 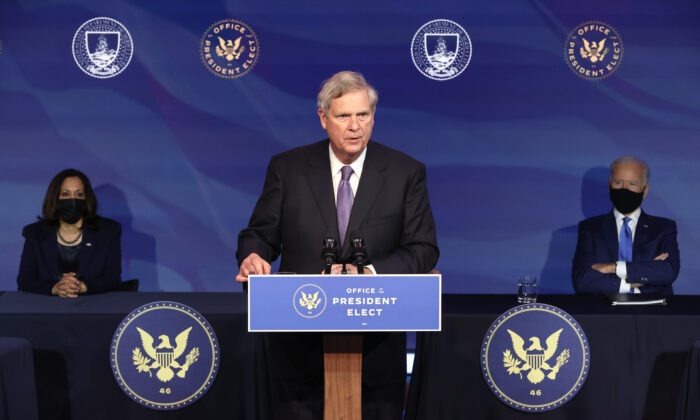 On Feb. 23, the U.S. Senate confirmed Tom Vilsack as secretary of the U.S. Department of Agriculture (USDA).

He has said he’s committed to advancing President Joe Biden’s climate agenda within the agricultural sector. He has also said he will prioritize nutrition equity and equity for farmers of color, echoing another of Biden’s top priorities, racial equity.

Vilsack will be responsible for getting food out to needy families as prescribed in the COVID-19 aid packages, and helping farmers through the CCP (Chinese Communist Party) virus pandemic.

Vilsack, 69, headed the USDA under Obama from 1999 to 2007. He then served as the CEO of the U.S. Dairy Export Council. A former governor of Iowa, he unsuccessfully ran for the presidency in 2008 and later endorsed Hillary Clinton.

The Senate approved the nomination by a 92-7 vote. Sen. Bernie Sanders (I-Vt.) broke the party line and voted against Vilsack.

“Agriculture is probably the first and best way to begin getting some wings in this climate area,” Vilsack said on Feb. 2, when he testified before the Senate Agriculture Committee on his nomination for secretary of agriculture.

The Biden administration has billed climate change as one of its immediate priorities, along with the pandemic, the economy, and racial equity.

Vilsack continued, “If it is voluntary, market-based, incentive-based, I think you will see farmers, ranchers, and producers cooperate extensively.”

He has proposed programs related to carbon sequestration and storage, methane capture and reuse, and biofuels.

Sen. Debbie Stabenow (D-Michigan) and Sen. John Boozman (R-Arkansas) of the agriculture committee urged Vilsack at the hearing to view farmers as a solution, not a problem, in advancing the climate agenda.

“Our drumbeat is whatever is done, it needs to be voluntary, producer-led, bipartisan, and it really starts with producers,” Stabenow said. “We know from [a] hearing we did last year in this committee that farmers are already doing things that are making a difference. They are capturing carbon and lessening the carbon pollution.”

Boozman said, “It’s important that USDA and this committee keep producers at the forefront of any discussion on climate change. Heavy-handed, one-size-fits-all regulations simply will not work.”

Former President Donald Trump had much support among farmers, in part for rolling back Obama-era environmental regulations that affected them. Notably, he contested the Waters of the United States rule and replaced it with the Navigable Waters Protection Rule.

Ahead of that change, Trump spoke on the matter at an American Farm Bureau Federation convention, on Jan. 19, 2020. “I am proud to announce that I am taking yet another step to protect the water rights of American farmers and ranchers,” Trump said, adding that the change would “allow states to manage their water resources based on their own needs and based on what their farmers and ranchers want.”

“You love your land. You’re going to take care of your land. You don’t need bureaucrats in Washington telling everyone what … to do with your land,” he said.

The agriculture economy is currently propped up by record-high subsidies provided by the Trump administration to mitigate the losses from years-long price drops, trade wars, and the pandemic. Vilsack he would build the economy through new markets, including biofuel at home and trade opportunities abroad.

Vilsack said he would advance nutrition equity by helping people of color cope with obesity, diabetes, and other chronic diseases. It’s one of four major areas he would focus on while tackling the pandemic; the other three are climate change, food security, and trade.

The USDA has an estimated 2021 budget of $151 billion and nearly 100,000 employees. Well over half of its budget goes to fund national food programs, such as the Supplemental Nutrition Assistance Program (SNAP, formerly known as the Food Stamp Program).

He also said he’ll make sure farmers of color have equal access to USDA support.

Vilsack, 69, was an orphan in Pittsburgh, adopted in 1951. He practiced law in Mount Pleasant, Iowa, and served as the city’s mayor when the farm sector was recovering from its second worst agricultural depression, caused by the farm credit crisis of the 1980s. He served on the Iowa State Senate before becoming governor.

So far, the Senate has confirmed nine of Biden’s 15 cabinet nominations. At least five of his cabinet picks are Obama administration veterans.