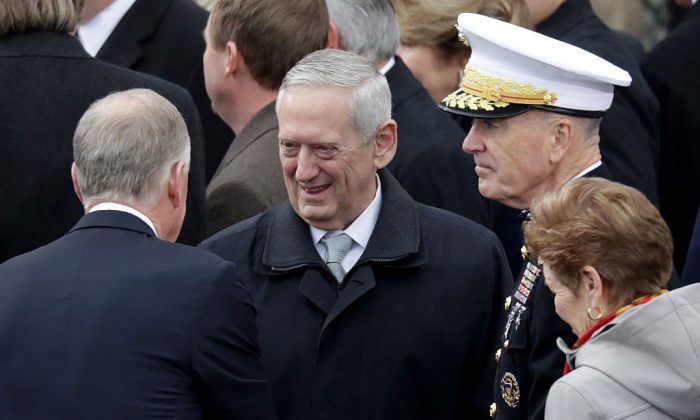 Senators voted on Friday to approve the nomination of James Mattis to be defense secretary, 98-1, just hours after Trump’s swearing-in at the U.S. Capitol. The selection of John Kelly to lead the Department of Homeland Security cleared the Senate, 88-11.

At a luncheon following his inauguration, Trump said Mattis and Kelly were from “central casting,” referring to their reputations as tough-talking, no-nonsense commanders.

But Democrats succeeded in stalling until Monday action by the full Senate on Trump’s pick for CIA director, Rep. Mike Pompeo, R-Kan. Sens. Ron Wyden of Oregon, Richard Blumenthal of Connecticut and Patrick Leahy of Vermont objected to what they said was a “rushed confirmation” and demanded more time for Pompeo’s nomination to be “vetted, questioned and debated.”

Republicans scolded Democrats for an unnecessary delay, noting that the move left the spy agency leaderless over the weekend.

Being lectured on the speed of nomination approvals didn’t sit well with Democrats, who reminded GOP lawmakers that they flatly refused to consider President Barack Obama’s Supreme Court nominee for 11 months.

Congress had to pave the way for Mattis to serve. Lawmakers last week passed legislation that Trump signed shortly after being sworn in that granted Mattis a one-time exception from the law that bars former U.S. service members who have been out of uniform for less than seven years from holding the top Pentagon job. The restriction is meant to preserve civilian control of the military.

Mattis retired from the Marine Corps in 2013.

Congress last allowed an exception to the law in 1950 for George Marshall, a former five-star Army general and secretary of state. Mattis replaces Ash Carter, who had been President Barack Obama’s defense secretary since February 2015.

GOP lawmakers pushed for a speedy and smooth transition at the Pentagon to ensure Mattis would be fully in charge should a national security crisis erupt in the hours and days after Trump’s inauguration. During his Jan. 12 confirmation hearing before the Senate Armed Services Committee, Mattis described a world in tumult and a U.S. military that is not robust enough to deal with all the threats the country faces.

Mattis is highly regarded on Capitol Hill for his character and judgment—traits that many Democrats believe make the retired four-star officer an essential bulwark against Trump’s propensity for bluster and impulsiveness.

During a military career that lasted four decades, Mattis served in numerous senior military positions, including commander of U.S. Central Command, which is responsible for U.S. military operations in Iraq, Syria and Afghanistan.

Among Kelly’s likely first assignments will be executing Trump’s plans for the fate of the Deferred Action for Childhood Arrival program, which has protected more than 750,000 young immigrants from deportation.

As the top officer at U.S. Southern Command, based in south Florida, Kelly routinely worked with the department to combat human trafficking networks and drug smuggling. The post included oversight of the detention center at Guantanamo Bay, Cuba, and Kelly clashed at times with the Obama administration, which pushed unsuccessfully to close the facility.

If Trump follows through on promises to toughen immigration enforcement, Kelly’s agency will be responsible for buttressing the screening of immigrants permitted to enter the U.S. He’ll also have to come up with the resources for locating and then deporting people living here illegally.

During his confirmation hearing earlier this month, Kelly told the Senate Homeland Security and Governmental Affairs Committee that he’s in favor of Trump’s plan for a wall at the Mexican border. But he said a physical barrier alone won’t be enough to secure the 2,000-mile frontier.

“Certainly it has to be a layered approach,” Kelly said.