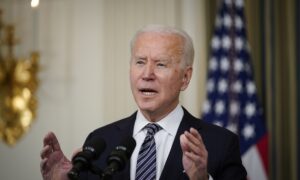 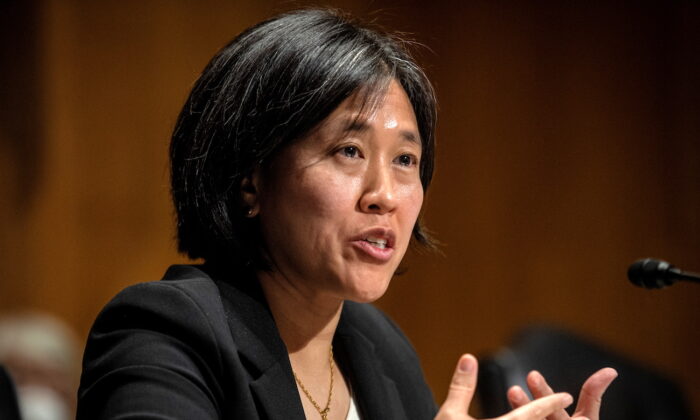 Katherine Tai addresses the Senate Finance committee hearings to examine her nomination to be United States Trade Representative, with the rank of Ambassador, in Washington, on Feb. 25, 2021. (Bill O'Leary/Pool via Reuters)
Congress

WASHINGTON—The Senate confirmed Katherine Tai as the top U.S. trade envoy in an overwhelming bipartisan vote on Wednesday. She will be the first Asian American and first woman of color to hold the position.

Tai is considered a problem-solving pragmatist, and her nomination by President Joe Biden to be U.S. trade representative drew support from Democrats and Republicans alike. She was confirmed on a 98–0 vote and is the 19th member of Biden’s Cabinet to clear the Senate.

A former trade negotiator and congressional staffer, Tai has vowed to work for a U.S. trade policy that benefits ordinary workers, not just big corporations, and to work more closely with America’s allies to confront an increasingly assertive China.

In her confirmation hearing, she ducked questions about how she’d handle several politically sensitive questions such as whether the Biden administration would drop former President Donald Trump’s tariffs on imported steel and aluminum and whether it would revive an Asia-Pacific trade agreement that was negotiated by President Barack Obama but jettisoned by Trump.

“I know firsthand how critically important it is that we have a strategic and coherent plan for holding China accountable to its promises and effectively competing with its model of state-directed economics,” Tai told senators last month.

In the biggest trade war since the 1930s, Trump slapped taxes on $360 billion in Chinese imports in a fight over China’s aggressive push to promote its own technology companies and challenge U.S. technological dominance.

Biden and his team appear to be in no hurry to reverse Trump’s China tariffs. U.S. legislators and policymakers across the political spectrum have taken an increasingly confrontational line on China, frustrated by its trade practices, crackdown on Hong Kong, and aggressive pursuit of territorial claims in the South China Sea.

Tai promised to work with U.S. allies to present a united front to Beijing.

At her confirmation hearing, Tai wouldn’t commit to dropping the tax on foreign metals, calling tariffs “a legitimate tool in the trade tool box.”

Tai also dodged a question about whether the Biden administration would revive the Trans-Pacific Partnership, a pact with 11 Pacific Rim countries. The pact excluded and was meant to isolate China and cement U.S. ties with other Asian countries. Trump called the TPP a job killer and withdrew from it in his first week in office. The pact also faced opposition in Biden’s Democratic Party.

Tai last served as the top trade staffer at the House Ways and Means Committee. She handled negotiations with the Trump administration over a revamped North American trade deal. Under pressure from congressional Democrats, Trump’s trade team agreed to strengthen the pact to make it easier for Mexican workers to form independent unions and demand better pay and benefits—decreasing the incentives for U.S. firms to move south of the border to take advantage of cheap labor.